Houdini's lost breakfront has been found!

While we've been focused on bathtubs and bookcases from 278, our friend Eric Colleary at the Harry Ransom Center has been quietly searching for another important piece of lost Houdini furniture. This was the large antique breakfront that once resided inside 278 and held many of Houdini's important books. The newspaper clipping below tells the story of the breakfront, and Eric's tweets from Monday offers the exciting update. 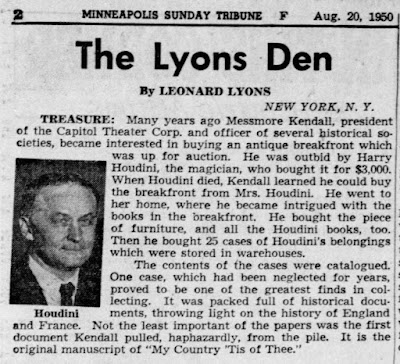 In 1956, a large breakfront bookcase belonging to Harry Houdini was sent to Texas along with Houdini’s extensive theatre collection and many personal papers. The Harry Houdini/Messmore Kendall Collection was a gift of vaudeville impressario Karl Hoblitzelle to @UTAustin. pic.twitter.com/T5LFjqo1dn
— Eric Colleary (@ecolleary) April 1, 2019

Today, after nearly a year of searching, we’re excited to reunite the bookcase with the Houdini Collection, now housed @RansomCenter. At 9 feet square, this massive bookcase has had quite the life! pic.twitter.com/yBc1273C2d
— Eric Colleary (@ecolleary) April 1, 2019


The breakfront has had a very interesting journey, including residing for many years in Governor’s Reception Room at the Texas State Capitol. Eric will be writing up the full story for the Harry Ransom Center website and magazine. 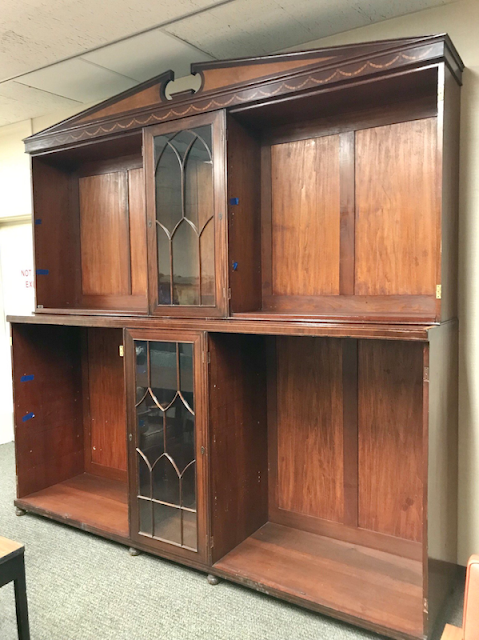 The Harry Ransom Center's Houdini Collections are open to the public and available via finding aids at the Ransom Center website.