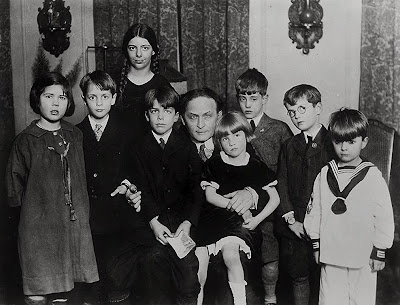 Houdini performed before royalty, faced down Russian and German secret police, sold out theaters across three continents, and baffled two U.S. Presidents. But did you know he also did children's birthday parties? Of course, it helps when the children are named Roosevelt.

Contained in the amazing lost Houdini Spiritualism scrapbook is a page with two detailed clippings about Houdini's private performance in 1925 for eight grandchildren of the late President Theodore Roosevelt. While there is one well-known photo from the occasion (above), details of this performance have never found their way into any biographies, so I'm happy to share the story here now.

The party took place on February 20, 1925, at the home of Mrs. H.A. Alexander, mother-in-law of Theodore Roosevelt Jr., at 167 East 74th Street in Manhattan. The party guests were: Grace (13); Theodore, III (10); Cornelius (9); Quentin (5); Edith (9); Kermit, Jr. (9); Willard (7); and Clochet (5). This was reported to be the first gathering of the eight grandchildren of the former President by his second marriage (two infant grandchildren did not attend). Chaperons of the party included the President's widow and Mrs. Kermit Roosevelt. Houdini "the great ectoclast" -- as he was called in the Political Notes section of The New York Times -- was the entertainment.

Houdini started with a series of sleight-of-hand tricks, which the Times dubbed as "thaumaturgy." Teddy was the most restless of the children, wanting to know how the tricks were done. Houdini had to twice push him away. "He was getting too close to the secret," said the magician.

Following the magic, Houdini took on the role of "medium" and proceed to give a seance. If this seems to be a curious choice for children, know that in 1925 Houdini was at the height of his spirit-busting fame. He had also amazed their grandfather with the same effect eleven years earlier. The Times account concludes:

Then he gave a mock-seance--only the eight grandchildren would not sit; they insisted on standing up and crowding around the medium. He produced two white pieces of silk, folded them up and gave them to the children to hold. He called upon the spirits. He begged them to make manifest their existence by painting portraits of the late President.

Again the medium set to work. He produced a great slate, 18 inches high and over two feet long. The children examined it; it was quite unwritten on. Carefully the medium wrapped it in a cloth. Teddy and Cornelius were made to hold it. Again the medium implored the spirits. The slate was unwrapped. It bore two portraits--one of the President, the other of Uncle Quentin, killed in France. Under the President's picture was an inscription saying that if he should ever come back, it would be through the medium of Houdini. Below was signed in unmistakable hand: "Your devoted Theodore" and "In haste, your devoted Theodore and Quentin."

Teddy III shouted: "It's a film and you developed it under the cloth."

"No," answered Mr. Houdini, "but believe anything except that spirits did it." 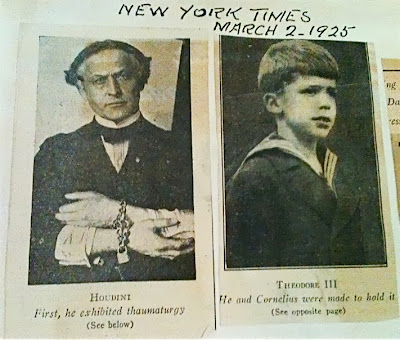