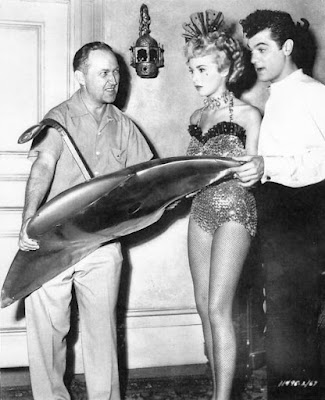 Here’s a nice bit of colliding Hollywood history. This photo shows Tony Curtis and Janet Leigh, in costume as Harry and Bessie Houdini, being shown one of the Martian spaceships from the classic War of the Worlds

by producer George Pal. Pal produced both HOUDINI and War of the Worlds for Paramount in 1953.

This photo recently sold on eBay as part of a set of personal photos belonging to a film director. The set also included rare color pictures from Creature From The Black Lagoon

(Universal monsters are another one of my passions).
Written by John Cox at 12:16 PM