The Office continues to tease us with hidden Houdinis

Once again Houdini made a stealth appearance on NBC’s The Office last Thursday. In an episode called “New Leads” a Houdini refrigerator magnet pops up in the office kitchen. You can catch it on HULU at 14:38. 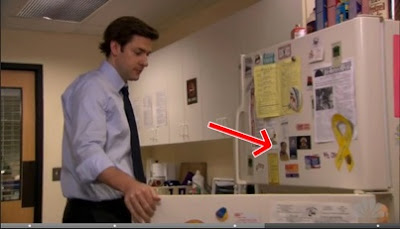 So why is there a Houdini magnet on the Dunder Mifflin refrigerator? As we speculated when we spotted our first hidden Houdini, The Office is set in Scranton, Pennsylvania, so it’s possible this is a nod to the Scranton Houdini Museum run by Dorothy Dietrich and Dick Brookz, a popular Scranton tourist stop.

Or it could be they are just messing with us.

UPDATE: Hungarian in a sack.