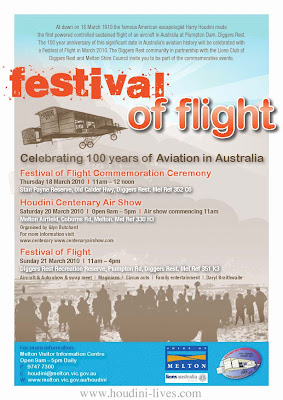 The centennial celebration of Houdini's first flight in Australia kicks off this week at Diggers Rest. Here is the schedule of events.

Commemoration (Diggers Rest)
Join the Diggers Rest Community
In celebrating the 100th anniversary of Harry Houdini’s first powered, controlled, sustained flight at Diggers Rest. The commemoration ceremony will include a talk on Harry Houdini, performance by illusionist Simon Taylor and presentation of a time capsule to the Diggers Rest Primary School. To close the festivities, we have local resident Anita Kennedy to sing the Australian National Anthem.


Houdini – Centenary Air Show (Melton Airfield)
Experience the thrill of flying!
Displays, formations flying and aerobatics at the Houdini – Centenary Air Show. Visitors will have the chance to see a showcase of aircraft that have flown in Australian skies over the last 100 years including Sea Fury, Kittyhawk, Mustang, Tiger Moth, Winjeel aircraft and more. On the ground you will be able to walk around beautifully restored aircraft and meet the pilots who fly them, while the kids will be entertained with aircraft making and other activities. Joy flights will be available and prizes including aircraft models, aviation memorabilia and joy flights will be given away on the day. Come and see the displays and meet the people who make aviation what it is today, and be a part of Australia’s aviation history as it enters the next 100 years.


Festival of Flight Celebrations (Diggers Rest)
Celebrate Houdini’s first circuit flight:
Sunday 21st March, 2010 at Diggers Rest
Featuring performances by Daryl Braithwaite, The Red Jane Show and master illusionist Cosentino. The Festival of Flight will have something for everyone, including carnival rides, live entertainment and kids activities such as face painting and kite making. Activities on the day will also include an auto and aircraft show and swap meet, magicians, circus performances, historical displays and talks and much, much more.


For more visit the Diggers Rest "Festival of Flight" website.