Heads up for some new Houdini fiction (I love this stuff). The Last Illusion

by Rhys Bowen is the latest book in the Molly Murphy Mystery series, and this time Molly is working to save the Handcuff King! 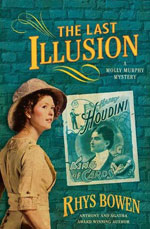 Set in New York City in 1903, Bowen's ninth Molly Murphy mystery opens with a magic show at Miner's Theatre on the Bowery, attended by Molly and her fiancé, police captain Daniel Sullivan, who wants her to give up her unconventional profession of private investigator. When the sawing-a-lady-in-half trick goes fatally wrong, this horrible accident brings the evening's entertainment to an early end, preventing Molly and Daniel from seeing the show's main attraction, Harry Houdini.

After both Signor Scarpelli, the magician whose stage equipment was apparently sabotaged, and his female assistant's corpse disappear, Houdini's wife, Bess, who worries an enemy of her husband is out to get him, asks Molly for help. Later, an act the handcuff king attempts almost ends in another death, confirming Bess's fears. The gutsy Molly, who's no prim Edwardian miss, will appeal to fans of contemporary female detectives.

and for the Kindle