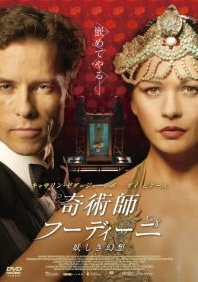 Check out the attractive cover art for this multi-territory Chinese DVD release of Death Defying Acts.

Released to theaters in July 2008, Death Defying Acts starred Guy Pearce as Houdini and Catherine Zeta-Jones as a Scottish psychic. While it is an entirely fictionalized episode in Houdini’s life, it’s a decent movie with excellent production design and performances.
Written by John Cox at 1:23 PM