The Perth Mint in Australia has issued a new stamp and coin commemorating Houdini’s first flight on that continent on March 18, 1910.

Both stamp and coin are issued today. A combo pack and several other options are available at the Australia Post website.

Celebrations commemorating Houdini’s historic first flight will be held in Diggers Rest next week. Events will include a special ceremony, a Houdini-Centenary air-show, magic performances, a one-third scale model of Houdini’s Voisin, and more. Details can be found at the Diggers Rest Houdini website as well as the Melton Shire Council website. 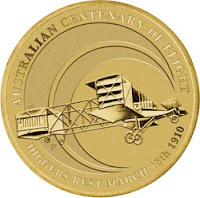