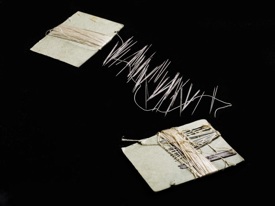 The Jewish Museum in New York is planning the exhibition, Houdini: Art and Magic, to run October 31, 2010 to March 27, 2011. Among the rare artifacts will be Houdini’s Milk Can and Needles effect (above) currently on display in Houston.

According to the official website, Houdini: Art and Magic will feature "magic apparatus, posters, broadsides, period photographs, archival films, and contemporary art works by artists inspired by the great magician and escape artist."

We’ll keep an eye on this and bring you more details as they become available.

UPDATE: Houdini collector and friend of the site, Kevin Connolly, has provided us with tantalizing new details on this Houdini exhibition. Says Kevin:

“It will also be in Los Angeles, San Francisco and maybe Wisconsin on its' cross country tour. There will be many items on display that have never been on display before. Also, there will be a hardbound exhibition catalog issued with articles by Ken Silverman and others. This will be a "must see" event for the Houdini or magic historian.”


Thank you Kevin. Sounds like this is going be a major Houdini event!