Danger in the Dark released in paperback 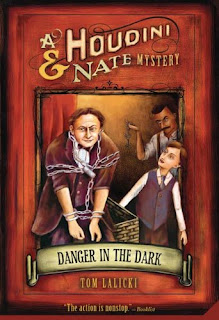 Set in New York in 1911, Danger in the Dark finds young Nate Fuller working as a clerk's assistant in a Fifth Avenue hat store. After Houdini buys a hat, leaving his calling card but no money, Nate is sent to the escape artist's home to present the bill. Houdini's wife befriends him, and he comes to trust her and her husband enough to share his concerns about the late-night séances that his aunt's new friend, David Douglas Trane, holds at her house. Working together, Houdini and Nate uncover Trane's scheme to convince Aunt Alice, through bogus exchanges with her late husband, to make him the beneficiary of her sizable estate.

Danger in the Dark can be purchased on Amazon. Details on the first two books in the Houdini & Nate series can be found at the official Houdini & Nate website.

The most recent Houdini & Nate novel, Frame up on the Bowery, is out now in hardcover.
Written by John Cox at 1:18 PM