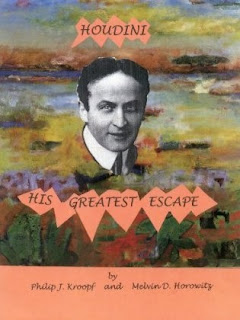 eBooks have really opened to the door to Houdini fiction. Today we have news of yet another book released for the Kindle, Houdini - His Greatest Escape

by Melvin Horowitz and Philip Kroopf.

From what I can tell from the (rather oddly written) editorial blurb, in Houdini - His Greatest Escape, Houdini returns from the grave in modern times to reunite with Bess, who has been reincarnated into a skeptical young woman. As he works to convince her who he is, Harry also has to tangle with Mr. Carraway, "the old man from beyond", whose mission is to drag Houdini back to where he belongs.

You know, I kinda like the sound of this.

Houdini - His Greatest Escape is available for the Kindle via Amazon.com