The Man From Beyond gets new DVD release 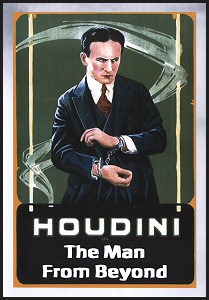 on DVD. The company advertises their version as running 75 minutes and featuring an "All new full orchestra music score."

The print on this new release is the down-and-dirty public domain version, although unlike the Alpha Video

release, it retains the original title card. This version is not tinted like the KINO

edition and, of course, it can't compare to the beautiful Restoration Series release, which is still the best version of The Man From Beyond out there. But I do like the new orchestral score of this Grapeview release quite a bit.

The box is strictly a "home made" effort that uses poster art from The Grim Game (above). There are no special features.

Directed by Burton King, The Man From Beyond was the first movie produced by the Houdini Picture Corporation. It was first released in 1922.

Grapevine's The Man From Beyond can be purchased at the Grapevine Video website or on Amazon.com

Email ThisBlogThis!Share to TwitterShare to FacebookShare to Pinterest
Tags: DVD, Movies, Reviews, The Man From Beyond (1922)