Houdini among the Luminaries 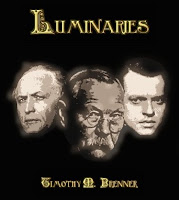 Some new Houdini fiction has been released. Luminaries

by Timothy M. Brenner is an "an alternate history mystery-thriller set in the early 1930's" that finds Sir Arthur Conan Doyle hired by the British Government to track down a serial killer who murdered a member of the Royal Family.

Conan Doyle, "who has the ability to touch objects and ascertain their history", travels to the United States to enlist the aid of Houdini, "a master of telekinesis," and Orson Welles, "who is gifted with the power of mental telepathy." Conan Doyle and Houdini "put aside their differences and work together for the greater good, but not without friction."

It looks like Luminaries is currently only available as a Kindle eBook from Amazon.com