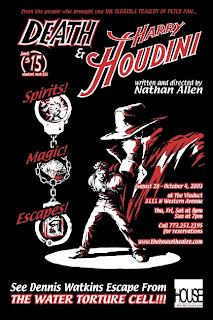 The House Theatre of Chicago has announced its 2011-12 season of original work, and among the plays is an all-new production of their very first show, Death and Harry Houdini, written and directed by Nathan Allen.

The play features magic performed by award-winning magician Dennis Watkins, including a live performance of The Water Torture Cell.

Death and Harry Houdini will run Jan 19- Mar 11, 2012 at the Chopin Theatre in Wicker Park. This is The House Theatre of Chicago's 10th season.
Written by John Cox at 6:49 AM