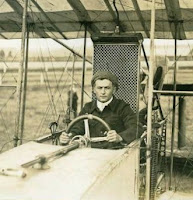 The Melton Visitor Information Centre near Diggers Rest, Australia, has on display a photographic exhibition of historical images of Houdini and his first flight in Australia.

The exhibition runs from June 24 to July 30 and includes images of the small scale replica of Houdini’s Voisin biplane built by local resident Ian Satur for the 100th anniversary celebrations last year.

Also, forty-four paper planes created by Diggers Rest Primary school pupils will be on display during Heritage Week. The public is invited to vote for their favourite paper plane through the People's Choice Award. The award winning paper plane will be announced in Houdini: Paper Plane Flying Competition on Saturday July 23.

For more information visit the official Melton Shire website.
Written by John Cox at 7:29 AM