Time for The Doctor to meet Houdini? 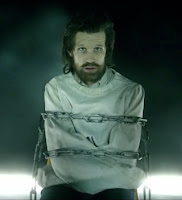 A review on Doctor Oho's Big Finish Blog of the latest Doctor Who audio drama, The Minds Eye, draws attention to The Doctor's connection to Houdini. Being a fan of Doctor Who, this caught my attention, and I fully endorse the idea of a Whodini adventure.

"The Doctor has name dropped Harry Houdini so many times now over various incarnations I think we are due a first Doctor companion chronicles where they meet and get caught up in an alien invasion that requires some expert escapism. I think the first instance of his name is in Planet of the Spiders

but I am willing to be corrected on that. The Doctor starts to figure how this world works and conjures up doors to escape through. In the world of dreams would a formidable foe; his imagination could probably see a way out of any situation."


Houdini was most recently name checked in The Vampires of Venice

, an episode of Matt Smith's first season as the eleventh Doctor. A list of Doctor Who-Houdini references can be found at Tardis Index File.

Thanks to Athena Stamos.