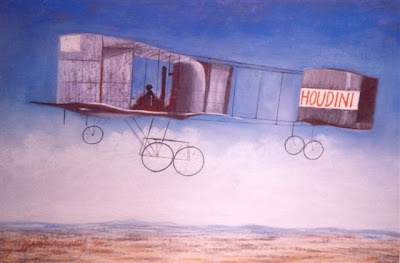 The Melton Weekly reports that a pastel celebrating Houdini's famous first flight in Australia is being put on display, having being found after "doing a Houdini of its own."

Barry Ackland created Houdini Has Landed in 2006, but it went missing soon after. The Sunbury painter, 72, is unsure how it disappeared, but was thrilled after it was found and returned to him two weeks ago. Exactly where the painting has been for several years remains a mystery.

"That I don't know, but it has resurfaced and it needed some work and had to be reframed," Ackland said. "I love history. If you don't learn from history, you've got no future. It blows your mind to think that the Hungarian-born Houdini came to Diggers Rest."