The hard-to-find 2007 study of Houdini's Mailbags by Clyde Mighells is now available as a Kindle eBook. It's good to see specialty works like this starting to reappear as eBooks. Back in the day, Houdini's Mailbags was only available direct from the author. Here's the description: 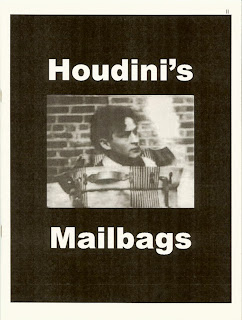 In 1907, while performing in Los Angeles, the Great Harry Houdini was challenged by the United States Postal Service to escape from its high security mailbag. The mailbag was outfitted with a government rotary lock that only the government was allowed to own. Worst yet, the key to the lock was chained to the inside of the safe at the Post Office. If Houdini was unsuccessful, he and the bag would had to have been carried to the Post Office to open it- what a humiliating loss that could have been!

Houdini's was successful however and the success resulted in endless recreations of the escape during the stage performances that followed. Though the escape was repeated endless times, the mailbag continued to evolve over the next two decades.

This book is filled with drawings, pictures and insights into the four mailbags associated with Harry Houdini and it debunks the notion of the "Bar and Bag" as being the version of the escape used by Harry Houdini.

Additionally, this book contains detailed information about the famous, "Patented Rotary Mail Lock" used on the original mailbag challenge! Its details have been protected by laws that have kept the public from owning this lock! Learn about its workings and its role in the escapes from Houdini's Mailbags.