The Houdini Box lands a writer-director 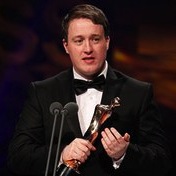 O'Rourke is a veteran of short films, animation, and TV work. The Houdini Box would mark his feature film debut.

First published in 1991, The Houdini Box tells the story of an aspiring young magician who meets Houdini at a train station. The boy receives a letter inviting him to Houdini's house -- only to discover that the magician died that day and left him a mysterious, locked box.

Peter Chernin and Jenno Topping will produce The Houdini Box, while Kerry Foster will oversee the project. Variety notes that a representative for Chernin had no comment.

Considering O'Rourke's background, I'm wondering if they are considering making this as an animated feature?
Written by John Cox at 5:09 PM