The secrets of The Secrets of Houdini

Today I continue my examination of books about Houdini with images and insights from my own collection.

The Secrets of Houdini by J.C. Cannell is a remarkable and somewhat mysterious book. First published in the UK in 1931, the book does indeed expose some key Houdini methods and contains an impressive collection of rare photographs. The book is arguably superior to the officially sanctioned Houdini's Escapes by Walter B. Gibson, which was published in the U.S. the previous year. So how did this book come to be without the apparent involvement or blessing of Beatrice Houdini and Bernard Ernst?


Not all that much is known about the author, J.C. Cannell. According to MagicPedia, John Clucas Cannell was a journalist, author, amateur magician and also Vice-President of the Magician's Club in London. Cannell is only credited with two other works, In Town Tonight (1935) and Modern Conjuring for Amateurs (1938).

But reading The Secrets of Houdini, it's pretty clear that famed magic publisher and Magicians Club President Will Goldston had a hand in this book, even though his name does not appear as publisher or even as a contributor. Cannell makes reference to "his friend" Will Goldston within the first few paragraphs of his introduction (he says Goldston is a "spiritualist"?), and you don't have to go very deep into the book before you find a photo of Houdini and Goldston. I can't help but wonder whether Goldston was the true author of this book and used Cannell as a front? It's possible.

The Secrets of Houdini was first published in hardcover by Hutchinson & Co. in the UK in 1931. Hutchinson released a revised hardcover edition in 1932 promoted as the "First cheap edition." Added to the text was a dedication ("To my wife Dorothy") and a new "Author's Note" in which Cannell expressed surprise at the controversial reaction of the book:

Since this book appeared I have received a large number of letters from people who have read it, and their reactions to the exposure of the method and technique of a would-famous illusionist and professional deceiver interested me mightily. Some of the letter writers declared that I had struck a deadly blow at the popular belief in the supernatural by revealing the coldly materialistic explanation of this modern wizard, Houdini. Others affirmed that, in spite of my revelations their belief in the psychic powers of Houdini had not been shaken.


A paperback edition of "J.C. Cannell's famous book" was released by Hutchinson's Pocket Library in 1938. The title page notes that it's the "38th Thousand" printing(!). The Author's Note does not appear in this printing.


The Secrets of Houdini wasn't published in the United States until 1971. The first U.S. edition was put out by Gyrphon Books and was a facsimile of the UK printing. The two Gyrphon editions that I've been able to examine (my own and one in the Arthur Moses collection) have different bindings, but both state "Third Impression" on the title page, so it appears the facsimile was struck from the British 3rd edition.

This was followed by another hardcover published by Gale in 1974, also a facsimile of the Third Impression. As far as I know, neither the Gyrphon nor Gale editions were issued in dust-jackets, and neither contains the "Author's Note" (which tells us the Author's Note was unique to the UK second edition?).


But the way most American readers (including yours truly) first discovered The Secrets of Houdini was via the Dover trade paperback first published in 1973. This edition added 24 new illustrations. Like Dover's other popular Houdini title, Houdini on Magic, it's still in print to this day. There have been dozens of printings of the Dover paperback over the years that offer subtle changes in the color of the cover art. And speaking of cover art, it was the Dover edition of The Secrets of Houdini that inspired a young David Blaine.


The Secrets of Houdini was published in a new hardcover edition by Bell in 1989. This edition contained a new forward by Bud Masterson and is unique in that it restores Cannell's "Author's Note" -- the first time the Author's Note had ever appeared in any U.S. edition to my knowledge. The Bell edition also retouched some of the photographs and credits the poster and props on the attractive dust-jacket to "Flosso Hornmann Magic Inc., the world's oldest magic shop" (which had once been owned by Houdini).

In 2010 The Secrets of Houdini was made available as a print-on-demand in hardcover and paperback.


But perhaps the strangest "reprinting" of The Secrets of Houdini happened in 2012 when Amazon listed six new "books" by J.C. Cannell with titles like: Harry Houdini the True Escapist Extraordinaire and Houdini and the Art of Illusion and Disillusion. Some of these showed prices as high as $26 and page counts as low as 30 pages.

But this was just the good-old Secrets of Houdini carved up into sections and offered up under new titles, part of an epidemic of sneaky public domain reconfigurations that have sprung up in the digital age. 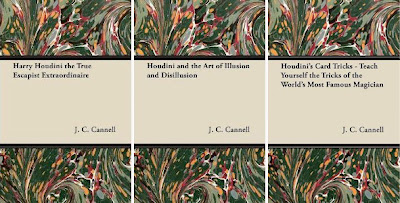 Thanks to Arthur Moses for his help sussing out details on the U.S. editions. Also thanks to John Bushey for the image and details about the 1932 "cheap" edition.