The truth of what really happened to Houdini's bust

In April 1975 the original bust on Houdini's tomb at Machpelah Cemetery in Queens was destroyed. How, why, and who did it has never been discovered. Legends have grown up around this incident. Bernard C. Meyer ends his provocative 1976 book, Houdini A Mind in Chains, with his own poetic theory of who might have committed the deed: 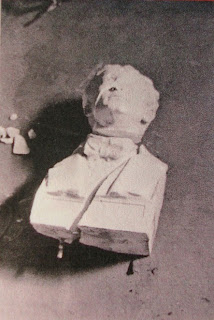 There is one ghostly hand, however, that might have smashed that granite bust--the hand of Ehrich Weiss, the rabbi's son, who from an early age had heard the injunction against the fashioning of graven images. Perhaps like a wrathful Moses destroying the calf of gold, reconciled at last to the faith of the patriarchs, the shade of Houdini's most secret self made one last escape, stole from the grave and performed his most amazing trick--his own decapitation.


Then there's the less poetic claims. One persistent rumor, espoused by no less than James Randi, is that escape artist and Death Blow author Norman Bigelow smashed the bust believing that Houdini had hidden his secrets inside. It's also been said the bust was smashed as part of a gang initiation. Ralph Stollow, the superintendent of the cemetery in 1975, told police that he received an anonymous call a week before the incident warning that the grave had been "booby trapped."

It's also been suggested that the bust was never smashed at all -- it was stolen. In fact, some claim the bust recovered by police in 2002 from the home of Stephen Chotowicky in New Hyde Park was the original bust and not the Society of American Magician's replacement (stolen in 1983).

But today we can put all the stories to rest because the tireless Dorothy Dietrich and Dick Brookz of the Houdini Museum in Scranton have discovered exactly what happened that night in 1975. The full story can be heard in a special two part episode of The Sensational Tales of Dorothy & Dick, the new radio show hosted by Dorothy and Dick on station WFTE in Scranton.

But I would highly recommend giving both these episodes a full listen because Dorothy and Dick tell the entire story of how they restored Houdini's grave bust in a "commando" raid in 2011. It took a lot of effort and is an amazing tale, and their generous act certainly washed away the dark shadow of what happened on the site in 1975.


Speaking of The Sensational Tales of Dorothy & Dick, I recently recorded two episodes discussing the 1953 biopic, Houdini. The shows have aired live on WFTE a few times. I expect it will be archived at dorothyanddick.com soon.