It's a very special week here at WILD ABOUT HARRY. This week we are Wild About Margery. Today I'm honored to share the first of several genuine artifacts from the Libbet Crandon de Malamud Collection, courtesy of Anna Thurlow, the great granddaughter of "Margery" herself.

Let's kick things off with Margery's own uncropped copy of what is certainly one of the most famous photos ever taken of her. It was used as the frontispiece in the book "Margery" The Medium by J. Malcolm Bird, and has appeared (cropped) in various books and articles over the years. But not many people know that this photo was taken by Houdini. It was one of a series of shots Houdini and Margery took together on July 24, 1924, some of which show a very different relationship than what has come down in history (remember this post?).

In a way, the story of this famous photo is the story of Houdini and Margery's curious relationship in microcosm. So lets look at three incredible artifacts from The Margery Files. First, the photo itself: 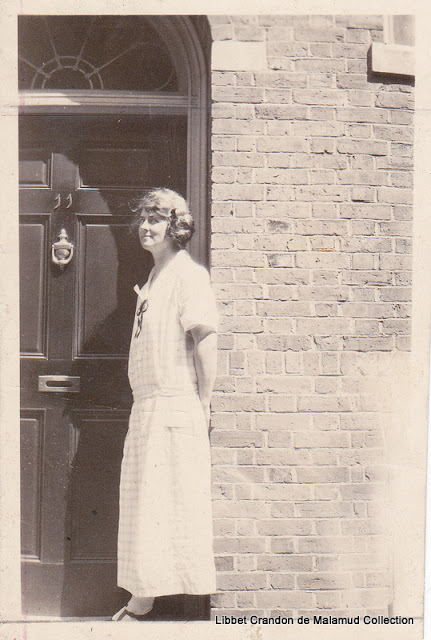 One revelation here is that the photo was taken not in front of Margery's home at No. 10 Lime Street, but in front of No. 11. There's also some very telling information on the back of the photo. But before we get to that, let's look at the amazing, never-before-published correspondence between Houdini and Margery about this famous photo set:

Not quite the combatants of legend, eh? What's even more remarkable is this exchange is after the July 1924 sittings in which Houdini detected Margery's methods and Margery knew that she had been caught (thanks to her informant, J. Malcolm Bird).

But here we see Houdini being disarming, cordial, even charming. He almost comes off sounding like a fan. But maybe he's just trying to reassure her that he's not going to come racing into the seance room and expose her at first blush during their upcoming August sittings (or come in with a big giant box to control her). Maybe he'll even play ball?

Margery in return is offering Houdini what I'm sure she sensed he enjoyed most: flattery. I especially love her line; "I am glad to able to say I know 'The Great Houdini'". But she's also being coy -- so casual and confident in her abilities that she isn't even sure when Houdini is scheduled to come sit with her. No advanced preparations necessary, you see.

So is this the sign of burgeoning friendship, or two seasoned gladiators showing civility before doing battle? Our generous patron, Anna Thurlow, great granddaughter of Margery, offers her own thoughts:

"It does seem to be a respectful and rather admiring tone, doesn't it? Quite different from their public conflict. It is also one of the very few exchanges from Margery to anyone (usually Dr. Crandon intercepted and assumed the responsibility of replying to her personal letters, often to the frustration of her corresponders), which says to me that this particular exchange meant a lot to her. Also, her tone in the letter is consistent with the family legend I grew up with - hugely respectful of Houdini. That is quite different from the tone Dr. Crandon reveals in his writing and correspondence, which is often derogatory."


Indeed, it appears Dr. Le Roi Crandon, Margery's husband and manager in psychic matters, at some point "intercepted" this photo as well. Because on the back we find in his handwriting: 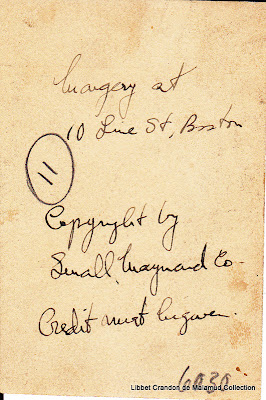 No mention of Houdini taking the photo here. In fact, Dr. Crandon seems to be going out of his way to remove any connection to Houdini. Here he is assigning Copyright to "Small, Maynard Co.", who published J. Malcolm Bird's "Margery" The Medium in 1925. He is even going as far as stipulating that "Credit must be given." He wanted to make sure Houdini saw the slight -- which, it turns out, he did.

Because deep in a special locked room of the William Larsen Sr. Memorial Library at The Magic Castle is Houdini's own copy of "Margery" The Medium. The book contains an annotation on the frontispiece photo -- this very same photo that Houdini took, shared with Margery, and promised not to use himself...


The battle is joined. And there's more to come. Especially as we next explore Subtle betrayals.

Additional thanks to Bill Goodwin and Lisa Cousins at the Magic Castle's William Larsen Sr. Memorial Library for allowing me to photograph Houdini's copy of "Margery" the Medium.