Today I bring you another round of "photo play" between Houdini and the Crandons. This photo from "The Margery Files" and was taken during the July 24, 1924 seance, which was Houdini's second sitting with the famous medium. It's an original photograph that might be strangely familiar, but we'll get to that.

This photo shows Houdini "controlling" the left side of Margery with the electric bell box between his feet. Note that Houdini has rolled up his pants leg. That's because he had sensitized his leg by wearing a surgical bandage all day so that he could detect the slighted moment of Margery's own leg in the dark. "She made so bold a sliding movement with her ankle to reach the box that I think she was under the impression that I was badly fooled or was going to help her like the others," Houdini later wrote. 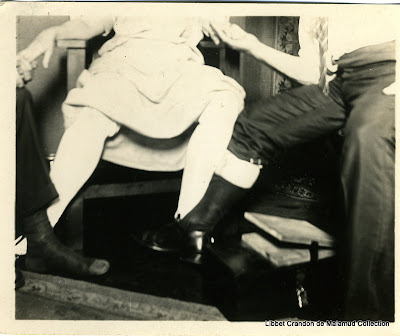 It's not clear who took this photo (possibly Dr. Crandon), but it appears to have been among a second set of photos that Houdini sent to Margery. Below is a never-before-published letter from Houdini to Margery that bares this out. This followed their correspondence in my previous post. Here Houdini's tone is a little more formal, but it's interesting how he states that he is "honestly not a skeptic" and how "Harmony must reign."

I can't help but think Houdini is purposely lulling Margery into a false sense of security here when he promises to cause her no "inconvenience of physical discomfiture." What must she and Dr. Crandon have thought when Houdini arrived at the August sessions with the formidable "Margie Box" in tow?

On the back of the photo we again find the handwriting of Dr. Crandon. Normally Dr. Crandon always sat to the right of his wife during seances, but here he identifies the second control as J. Malcolm Bird. Bird was a fellow member of the Scientific American committee and was a houseguest of Crandons during the seances. He was also deeply in the tank for Margery. "Either he is as dum [sic] as I think he is, or the good time he is having causes him to mislead the public," Houdini wrote to Bess. 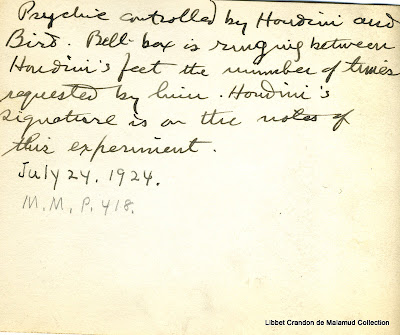 Dr. Crandon's reference to Houdini's notes of the "experiment" is also interesting. Crandon would collect and keep all the notes from Margery's sitters just in case they made public comments that contradicted what they had experienced in the seance room. Dr. Crandon told Sir Arthur Conan Doyle, "I have the material to crucify them, and they know I shall not hesitate to treat them surgically if necessary."

Now, the reason this shot looks familiar is it was used by Houdini as the bases for a damning illustration in his pamphlet, Houdini Exposes the tricks used by the Boston Medium "Margery". Here Houdini shows Margery's foot about to ring the bell box, which is sitting at a much more advantageous angle here. 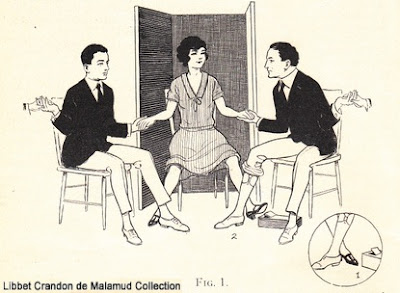 Of this second round of "photo play", Anna Thrulow, great granddaughter of Mina Crandon and our generous guide through The Margery Files, has these thoughts:


Indeed, the story of Houdini and Margery is filled with "subtle betrayals". In light of his letter, Houdini's use of the Margie Box could be seen as another. However, I also agree with Anna that one can sense a certain level of mutual respect between to the two master tricksters. It's a dichotomy. But maybe that's why the story of Houdini and Margery is still so compelling. It seems the truth still out there.

Speaking of the truth, tomorrow will rewrite a little postmortem Houdini history when The Margery Files exposes Margery's Inside man. And if you think I'm talking about Bird or Hereward Carrington; not so Fast...

Additional references: Houdini!!! The Career of Ehrich Weiss by Kenneth Silverman; The Secret Life of Houdini by William Kalush and Larry Sloman.

UPDATE: Houdini's copy of the same photo can be in Doug Henning's Houdini His Legend and His Magic along with Houdini's own notes on the back (page 87). The photo is now in the Jon Oliver Collection.
Written by John Cox at 8:18 AM