Aaron Sorkin drops out of Houdini 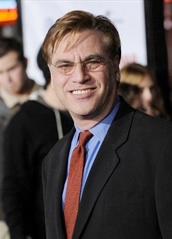 Uh-Oh. Deadline Hollywood reports that writer Aaron Sorkin has dropped out of the Houdini Broadway musical slated to star Hugh Jackman for the 2013-2014 season.

According the site, Sorkin dropped out because of scheduling conflicts with his HBO series The Newsroom and his duties writing a Steve Jobs biopic for Sony Pictures. The producers are looking to "continue developing the musical utilizing Sorkin’s initial concepts and other materials."

Frankly, I don't buy the scheduling excuse. It sounds to me like Sorkin's script didn't work and is going to get a rethink. While I'm a fan of his film work, I was always perplexed by the choice of Sorkin, who's never written a Broadway musical before. I also wasn't doing cartwheels at the description of a plot "told in a contemporary tone" (whatever that means) about "an epic battle that took place between the world's greatest illusionist and a trio of women, known as Spiritualists."

So while I'm not brokenhearted to see Sorkin go, I am very spooked that this could be a major setback for the musical. I was really hoping to see Houdini on Broadway before the end of the year. What happens now? Stay tuned.

Aaron Sorkin: "I was really looking forward to returning to Broadway and working with such an incredible team. I am very disappointed my schedule won't allow that at this time."

Producers Scott Sanders and David Rockwell: "Mr. Sorkin's considerable talents are an asset to any project and we regret that he's unable to remain with Houdini. However, what Hugh and the creative team continue to create is one of the most exciting projects we've ever been a part of. Our projected arrival on Broadway and additional creative team announcement will be made at a future date."


UPDATE 2: According to Vanity Fair, Sorkin has now somehow found time in his busy schedule to write a different Broadway musical.
Written by John Cox at 6:54 PM