Nick Lewin recalls his brush with Houdini and Hitchcock 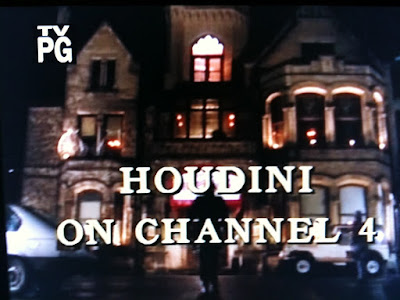 Magician Nick Lewin has posted on his blog, remarkablemagic.com, his memories of filming an episode of Alfred Hitchcock Presents called, Houdini on Channel 4. The episode was written by especially for Nick by friend and producer Michael Sloan (creator of The Equalizer). Nick offers up several interesting details on the 1987 production, including:

"Sloan added a couple of special treats to the episode especially for magic buffs and they hugely benefited the impact of the episode. The production licensed some rarely seen Houdini footage from the Manny Weltman archives which was featured to fine effect in the production. It was really great to find myself onscreen working side by side with my childhood hero.

The second surprise that Michael included in the episode was in regard to the secret Houdini shrine/séance room created by my character in the storyline. With a lavish touch of authenticity, all the Houdini memorabilia that festooned my séance room actually belonged to Houdini himself. It had been shipped to Toronto from Abb Dickson’s collection in Atlanta, under the supervision of Mike Russo."


Houdini on Channel 4 features Nick as Jack Barclay, a magician performing at a faux Magic Castle, and even has a ghosty appearance by Houdini himself played by Jan Filips. It's good fun.

Read 'My Brush with Alfred Hitchcock and Harry Houdini' at Remarkable Magic. Nick has also posted the entire episode on his official website HERE.
Written by John Cox at 11:28 AM