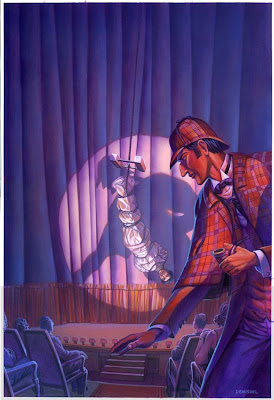 Today is Sherlock Holmes' 159th birthday. Holmes scholars agree (more or less) on January 6, 1854 as the great detective's birthday based on information given in His Last Bow. The first Sherlock Holmes story, A Study In Scarlet, appeared in 1887.

But why are we celebrating this milestone? Because Houdini was a Holmes buff -- a "Sherlockian", if you will. According to the recent book Houdini and Conan Doyle, Houdini had in his library "1,343 items of correspondence, heirlooms, souvenirs [and] merchandise pertaining to Sherlock Holmes." And while Houdini and Holmes creator Sir Arthur Conan Doyle had a relationship in real life, Houdini has been teamed with Sherlock himself in several fictional adventures.

The very first Houdini-Holmes mash-up appears to have been a 1908 German dime novel called Auf den spuren Houdinis ("On the Trail of Houdini"). More recent adventures have included: The Pandora Plague by Lee Matthias (1981); The Adventure of the Ectoplasmic Man by Daniel Stashower (1985); Sherlock Holmes and the Houdini Birthright by Val Andrews (1995); The Adventure of the Magician's Meetings by Larry Engle and Kevin VanHook (2012); and the graphic novel Houdini & Holmes by Polly Guo (2011).

Holmes-Houdini artwork by Carles Demiguel for the Spanish edition of The Adventure of the Ectoplasmic Man.
Written by John Cox at 11:10 AM