Houdini had several Bibles in his home. The oldest one appears to be this Hebrew-German Bible that belonged to his father and contains Rabbi Weiss' name on the title page along with an inscription by Houdini. The story of the discovery of this remarkable Bible appears on MagicTricks.com: 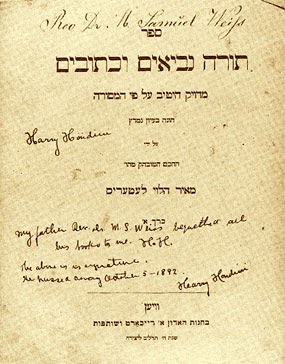 In the summer of 1986, magician Peter Monticup was performing at a resort in the New York Catskills. During an afternoon break, he took a drive into the countryside, and stopped at a barn sale. As always, he did a trick or two for the amusement of the people there, and handed out his business card. The barn owner/antique dealer immediately piped up, "Oh, I've got something you might like to purchase!"

A few minutes later, the woman handed Peter a cardboard box containing some framed photos, and a large book. The photos were personal portraits of Harry Houdini and his wife, Bess, portraits they kept on display in their home. The book was a Hebrew-German bible, signed by Houdini and his father.

In fact, the bible had been signed three times on the front page by Houdini. He wrote his name once in the middle of the page, then wrote the notation, "My father Rev. Dr. M.S. Weiss bequeathed all his books to me." He added his initials to that note. Underneath, he added, "The above is his signature. He passed away October 5- 1892. Harry Houdini". At the top of the page is the signature of his father, Rev. Dr. M. Samuel Weiss.


At $52,900, I bet we might be able to guess which "major private collection" now holds this Houdini Bible, you think?

Another Houdini Family Bible (Old Testament) published in Hebrew and English was profiled by Masonic Historian Paul Scheeler in the Fall/Winter 2005 Illinois Freemasonry magazine. That Bible appears to have belonged to Bess who gave it to Jerold Horwitz, a close friend, after Houdini's death. The Bible now belongs to his son, Charles Horwitz. Below is Paul's article which he has generously allowed me to share here:


A third Houdini Bible is housed in a the McManus-Young Collection, Rare Book and Special Collections Division of the Library of Congress. This was also owned by Rabbi Weiss and also contains his name inside. (The decline in his penmanship compared to the earlier Bible might be telling.) This is a German Bible containing both the Old and New testaments published in New York in 1892, the year Rabbi Weiss died. It also has his business card inside. The photo below is from the LOC website by way of Carnegie: Magic Detective. 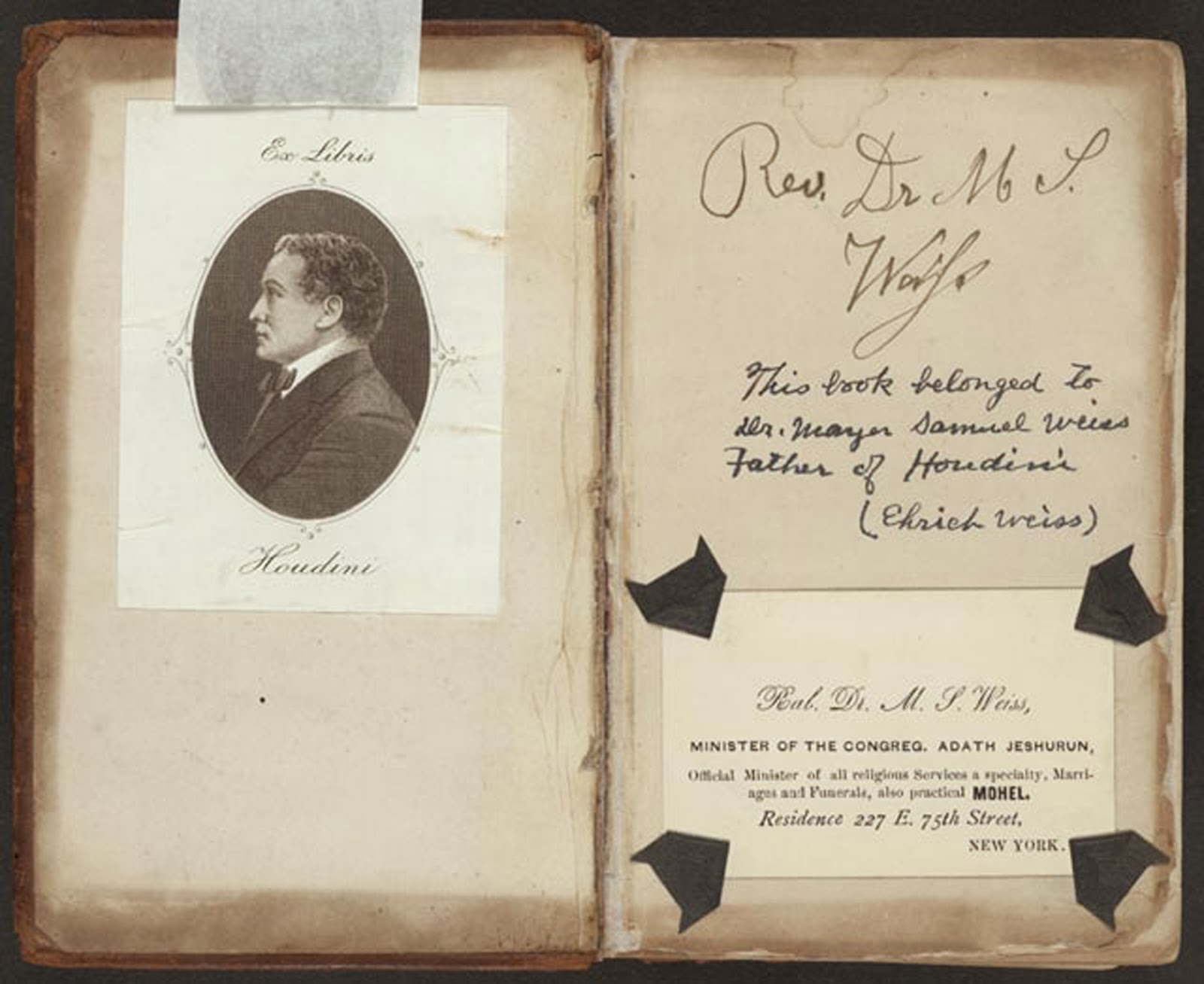 Interestingly, there is yet another "Houdini Bible" due to be auctioned at Potter and Potter this month (February 8) as part of the Burton S. Sperber magic collection. But this is a "tricked" Bible. The auction description is below: 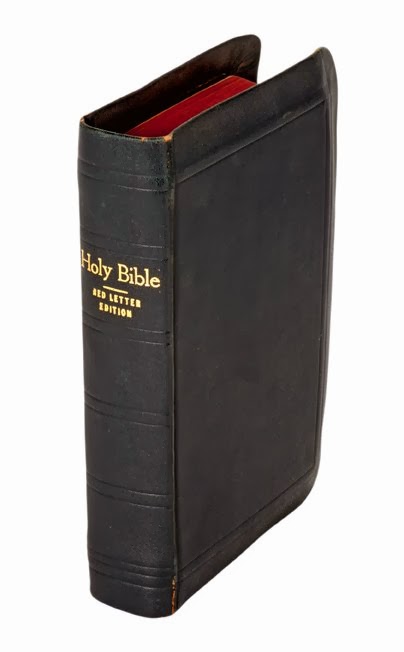 Outwardly, the tome appears to be an ordinary Bible, but in fact it was manufactured to Houdini’s specifications in a particular manner. The preparation of the book allowed Houdini to perform the following: a spectator was invited to turn to any page in the bible, and begin reading silently. Instantly, Houdini would know the words that the spectator was reading. One spot at base of spine rubbed and cracking, a few page-edges nicked, otherwise fine condition. Owned by Harry Houdini.


So there's your rundown of Houdini Bibles. Of course, here's the only Bible in my home:

UPDATE: A new Houdini Bible has surfaced! Check out: The doctor, the nurse, and the Bible of Ehrich Weiss.
Written by John Cox at 10:13 AM