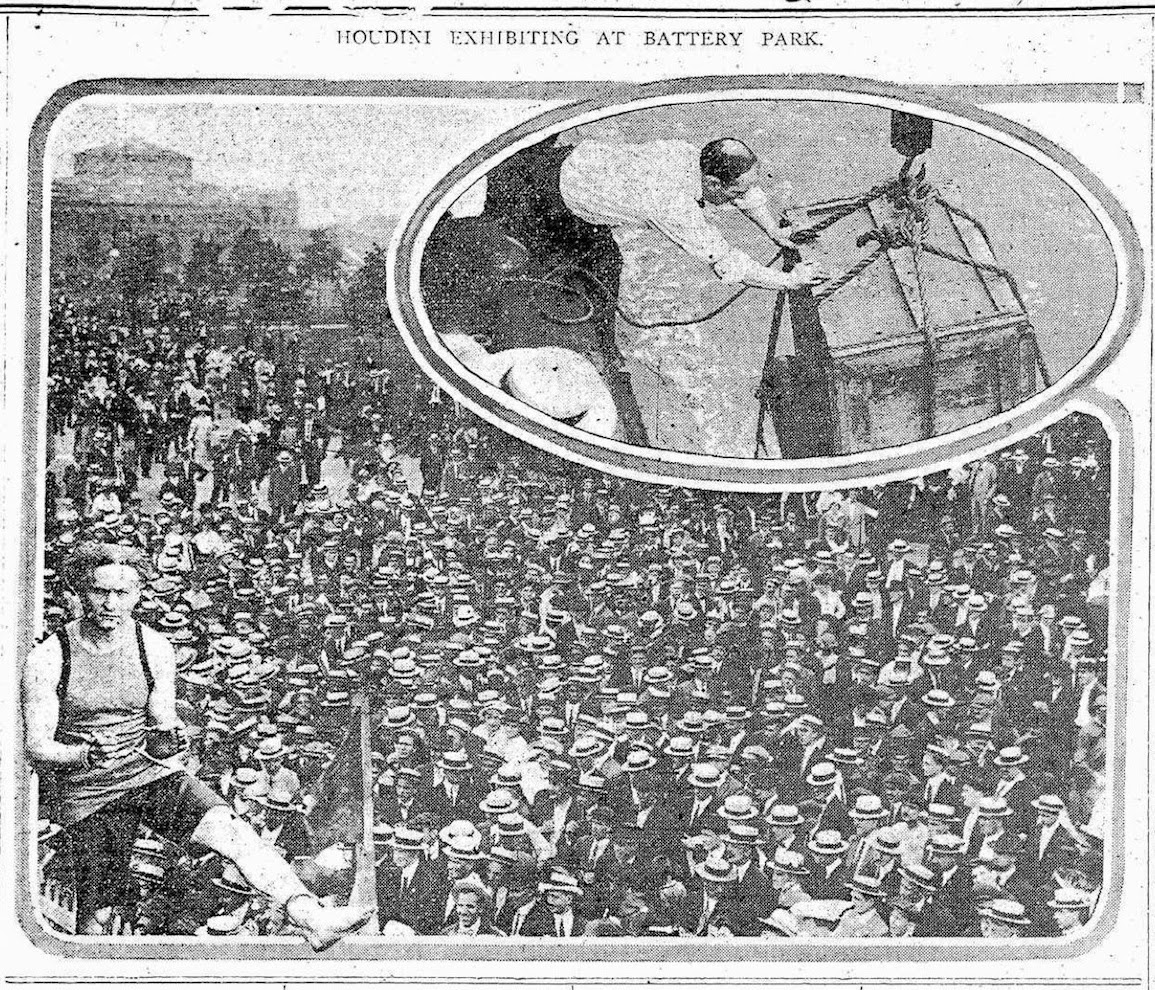 On July 15, 1914, Houdini performed his overboard box escape off New York's Battery Park before a crowd of 15,000. It's an escape that, while well-represented in photos, receives scant attention in most Houdini biographies. This is surprising as it was a major event and also gave Houdini one of his closest calls (according to him). So I thought it was high time to shine a light on this uncelebrated but still spectacular Houdini escape.

This was a significant time for Houdini, who has just turned 40. The previous month in England he had experimented with presenting his first all-magic show, the Grand Magical Revue, and he was making ambitious plans to embark on a world tour in a traveling caravan. What Houdini didn't know was that World War I would break out in Europe in just a few weeks, preventing him from traveling overseas for six years. It's also worth noting that July 17 marked the first anniversary of his mother's death, which still haunted him. 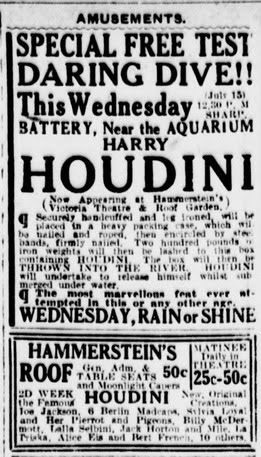 Houdini would promote his Hammerstein's engagement in a major way. On July 13 newspapers announced that he would make a "DARING DIVE!!" off Manhattan's Battery Park "near the aquarium." Houdini would be shackled and nailed into a packing crate and then thrown (always "thrown") into the harbor. The "special free test" would take place on Wednesday, July 15 at 12:30 p.m., "rain or shine." (As a side note, the Battery Park aquarim was once Castle Garden, where emigrants were processed in the years before Ellis Island, including the 4-year-old Houdini.)

This was actually Houdini's second overboard box escape in New York. On July 7, 1912, he performed the feat from a tugboat off Governors Island. (He was forced to hire a tug when police arrived and forbid the performance from the pier.) In that escape, his crate was sent down a seesaw plank into the water. This time Houdini would again use a tugboat, the J.A. McAllister, but a block and tackle would lower the box. It may have been the first time he used a block and tackle for the overboard box, and, as we'll see, it may have caused him some problems.

Clad in his bathing suit and accompanied by Hardeen, Houdini drove to the challenge in a 60-horsepower racing car. He was cheered all along the three-and-a-half-mile route from the theater district to the harbor. On his arrival, he found that 15,000 people turned out to witness the escape. The New York Tribune reported that the massive crowd "surged back and forth along the water front" with such force that police had to drive them back so those in the front wouldn't be thrown into the harbor. The paper also reported that Houdini had "an equally hard time driving away the moving picture photographers who insisted upon reeling off his feat despite the fact that he had his own staff of film-makers on hand."

It's a heartbreaking detail to learn that this escape was filmed because, as far as I know, not a frame of this film survives today. (However, we do have footage of another overboard box escape HERE.)

Photos show Houdini, dressed in a dark colored bathing suit (in 1912 he wore an all-white bathing suit), shackled in two pairs of handcuffs and leg-irons, with chains running from his hands to his ankles. He was then nailed into the packing box which was then roped and secured with what the Tribune called "steel tape." The box was then lowered over the side of the tug under the careful eye of Jim Collins. The unpublished photo below from our Hinson Endowment shows Collins using his foot to adjust the box's assent or keep it steady, which might indicate the first sign of trouble that Houdini later described. 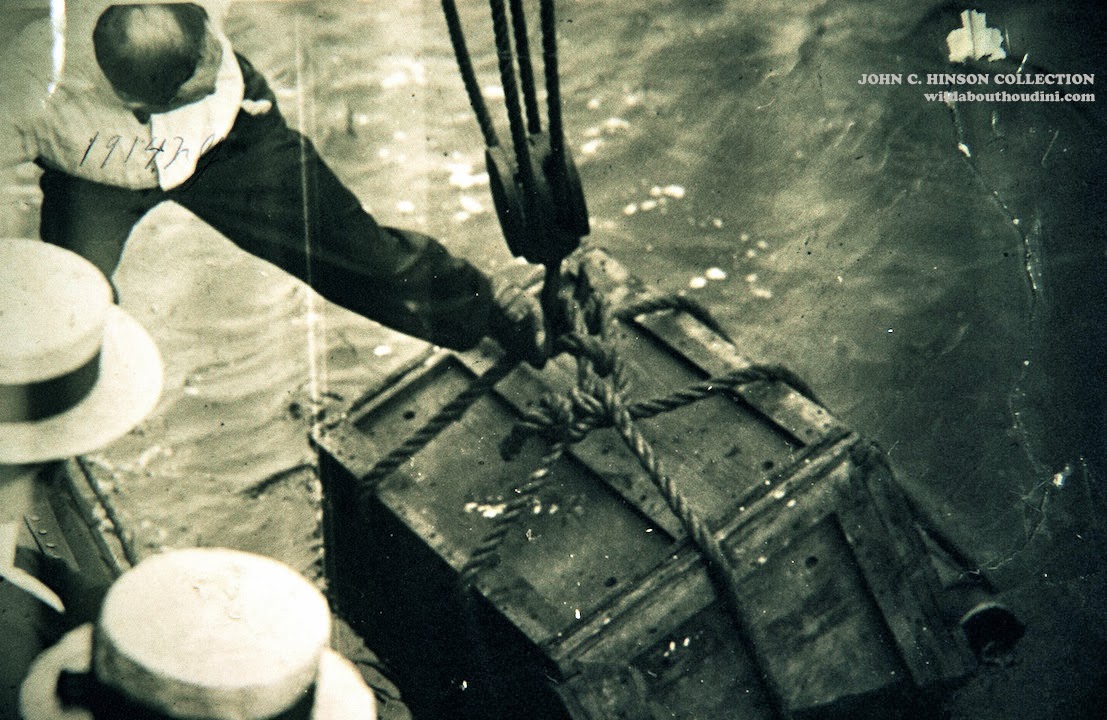 The tugboat blew its horn as the box descended and disappeared below the water. One minute later, Houdini appeared at the surface to the cheers of the crowd. This was faster than his 2.5 minute escape in 1912. (The paper doesn't record whether the tugboat blew it's horn a second time to signal that Houdini was free, but it's very likely it did.) The paper said that "the spectators wandered off debating, some saying that he kept the keys in his thick hair; others that he had an evil genius."

But the escape had not gone as smoothly as it appeared from the surface. In an autobiographical article Houdini wrote in 1919 called "Dying For A Living," he related what had happened that day under the water:

Some of you who read this may have been at the Battery in New York on July 15, 1912 [sic]. The date is seared on my memory, and so is the picture of the crowd that I saw just before I lowered myself, manacled and handcuffed into a packing-box that stood at the water's edge. Into this box had been placed 200 pounds of lead so that it would quickly sink, and with the top securely nailed it was bound about with ropes, and held for a moment until I gave the word, and then thrown overboard.

Whatever happened I don't know until this day. It may have been that a passing boat disturbed the water, for as the box was sinking it seemed to be thrown about roughly. What I had to do to make my escape from the box had to be done in seconds, and even as I write of it now there comes to me a feeling of suffocation and I recall the moment of my discovery that the ropes had become entangled and I was face to face with the dreaded one chance of the thousand.

Always when under water, and of necessity holding my breath, my mind works just as freely and clearly as under normal conditions. On this day, down there under many feet of water, it became necessary for me to work faster than I had ever worked in my life before and my mental apparatus proved equal to the task. However I did it I am not quite sure now, but my time hadn't come and the thousands of persons who watched cheered loudly as I came to the surface freed of the manacles and handcuffs.


It should be noted that in this same article Houdini goes on to tell the tale of being trapped under the ice during an overboard box escape (post on that coming soon), so maybe this battle under the Battery is an invention as well? You never know with Houdini. However, there is some indication that it might be true. As I pointed out, the photo of Collins shows him steadying the box, and the papers report that there was a second boat, "P.D.7" on the scene, so this might have caused the disturbance Houdini talks about. The use of a block and tackle connected to the tug would have made the box highly susceptible to turbulence. Finally, Houdini rapid escape jives with the 1 minute escape time described by the paper.

So there we have Houdini's 1914 Battery Park escape. It's really a great stunt and it's odd that these details have been largely lost to Houdini history…until now. 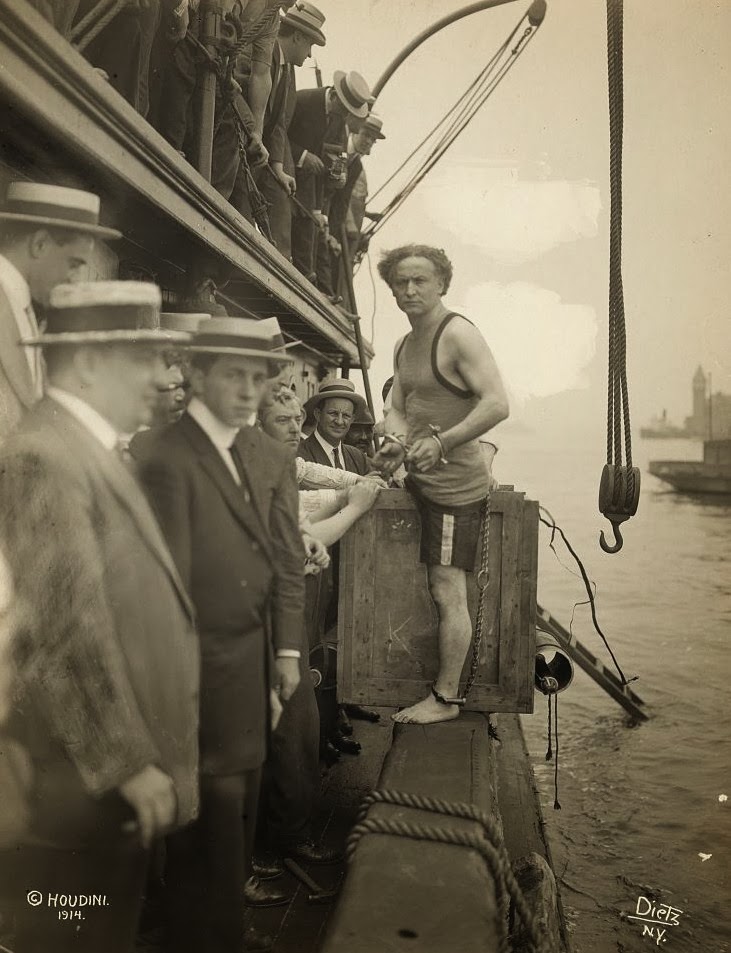 With thanks to Mantoo, Dana Keller, Patrick Culliton, John C. Hinson, and especially Joe Notaro of Harry Houdini Circumstantial Evidence for providing me with the newspaper accounts of the Battery Park escape.