"Houdini is in town. Can we help?" 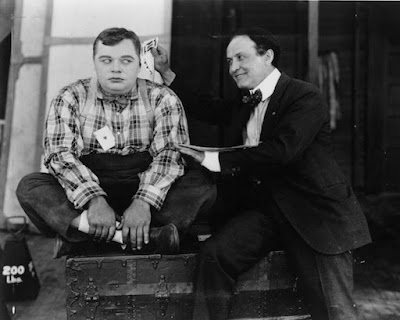 Here's a terrific nugget of information from our friend Lisa Cousins, librarian at the William Larsen Sr. Memorial Library at The Magic Castle. (I shared this at my recent "Houdini in Hollywood" talk at the Castle.) It involves Houdini and comedian Roscoe "Fatty" Arbuckle, seen above the set of Backstage in 1919. Lisa writes:

"I've been reading a book called Room 1219 about the Fatty Arbuckle scandal and trials, and I was amused when I came across an anecdote involving a "Judge John Cox," who sentenced actress Bebe Daniels to ten days in prison for speeding. The coincidence became even more amusing when the point of the anecdote proved to be Fatty Arbuckle sending a telegram to the jailed Bebe Daniels, which read "Dear Bebe, Houdini is in town. Can we help? Love."

Judge John Cox seems to have benefited somewhat from the publicity, as Bebe sang a song called Judge Cox Blues at a benefit, and Bebe is said to have been visited by 792 friends during her ten days in jail, including numerous Hollywood celebrities "and one new celeb, Judge Cox."


Not be a buzz kill like my namesake, but Houdini actually wasn't in town in April 1921 when Bebe did her famous stint in jail. But it's a good joke, and the Bebe-Judge Cox speeding incident is a great story from Hollywood's silent era.

You can read more about Bebe Daniel's arrest and Judge John Cox at the Orange County Sheriff's Museum website.