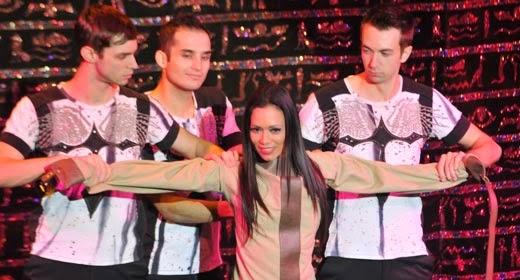 Magician Hellevi Woodman, who bills herself as Madame Houdini, is appearing at the Eldorado Resort Casino in Reno, NV. Hellevi earns her Madame Houdini moniker by performing a suspended straitjacket escape as part of her show. Here's a description:

From the producers of the award-winning stage spectacular, “Magique” comes a sensational and sensual new magic show appearing in the Eldorado Theatre now through April 19. Madame Houdini will astound audience members with her dazzling deceptions and stunning aerial skills.

The art of magic has been dominated by men for centuries. Only a handful of strong, talented female magicians have ever succeeded in the highly competitive field of grand illusion. For the first time in the United States, audiences will see one of the most glamorous and successful performers in the world of magic when Madame Houdini (Hellevi Woodman) takes the Eldorado stage.


You can purchase tickets to the Madame Houdini show at the Eldorado Resort Casino website.