'The Witch of Lime Street' will appear in October

It's official! David Jaher's much anticipated (and much delayed) non-fiction study of Houdini and Margery will be released on October 6, 2015. Amazon now has a pre-order page for The Witch of Lime Street: Séance, Seduction, and Houdini in the Spirit World. Here is the full book description:

The 1920s are well remembered as the golden age of jazz and glamorous prosperity. Less remembered is the era's fevered yearning for a connection to an unseen spirit world. That '20s roar came soon after tens of millions of lives were lost in the First World War and the Spanish-flu epidemic. A desperate search for reunion with so many lost souls precipitated a tidal wave of self-proclaimed psychics—and, as credulity reached an all-time high and reputable media increased coverage of paranormal phenomena, mediums became celebrities.

That is how, in 1924, a pretty Boston housewife became the idolized focus of the raging national debate over Spritualism, a movement centered on communication with the dead. Tabloids dubbed her the blonde witch of Lime street, but she was known to her followers simply as Margery. Her most prominent advocate was none other than Sherlock Holmes' creator, Arthur Conan Doyle, who believed so thoroughly in Margery's prowess he recommended her to the editors of Scientific American, which was offering a prize to the first medium who could authenticate her powers to its impressive six-man investigative committee. Her supernatural gifts astonished five of them. There was only one judge left to convince...the most renowned escape artist of all time.

Master illusionist Harry Houdini had dabbled in séances during the early part of his career. His experiences with con artists who took advantage of grief-stricken believers turned him solidly against Spiritualism, and he spent much of his later life debunking the occult movement. But that was all before he walked up the stairs at 10 Lime Street, where one of the most debated psychic research investigations would unfold, and where he would potentially meet his match.


This is exciting. It's been a while since we've had a major new non-fiction Houdini work to sink our teeth into, and as the description says, this is indeed the first standalone study of Houdini and Margery. At 432 pages, this is one that I'm greatly looking forward to!

The Witch of Lime Street was first announced back in 2007.

Pre-order The Witch of Lime Street by David Jaher on Amazon. 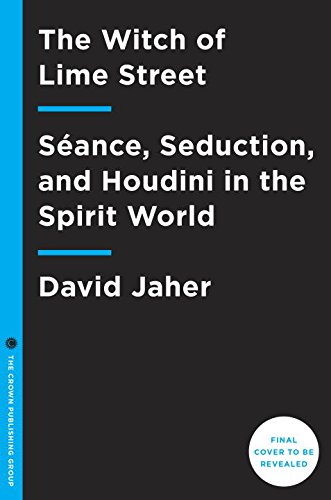