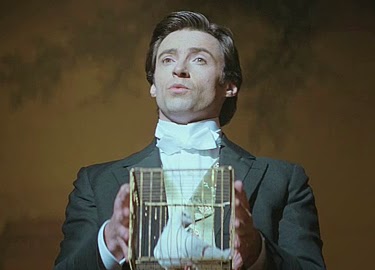 The New York Times has an article by Patrick Healy all about the tortured development of the Houdini Broadway musical. The project, which was first announced in 2008, lost its star, Hugh Jackman, and composer, Stephen Schwartz, last year. This was after writer Aaron Sorkin left the project the previous year.

Below is a highlight from the Times piece which gives insight into what this production could have been:

[Aaron] Sorkin chose to set his story during Houdini’s final days, in 1926, with much of the action taking place in flashbacks. (A copy of his 2012 script, with Mr. Schwartz’s lyrics, was provided to The New York Times by a member of the production team.) The show centered on Houdini and Margery Crandon, who emerges as a complex character, by turns antagonistic and comforting, as she accompanies him in a dreamlike state as he relives moments in his life. (Jane Krakowski of TV’s 30 Rock and a Tony winner for Nine, played Margery in readings.) Some passages are funny, some tender, but many others are full of the long, brainy conversations that are a hallmark of Mr. Sorkin’s writing but less common in musicals. (Mr. Sorkin’s agent said that the writer would not comment for this article.)

Mr. Schwartz, meanwhile, wrote more than a dozen songs for the show, exploring Houdini’s relationship with his rabbi father (“Have a Little Faith in Me”) and the inherent deceptiveness within illusions (“It’s a Cakewalk”). But work sessions proved difficult to schedule; in 2011, for instance, members of the “Houdini” team flew to San Francisco to meet Mr. Jackman, who squeezed in meetings as he was rehearsing a concert that would soon become his smash revue “Hugh Jackman: Back on Broadway.” And developing thrilling moments of magic often seemed secondary to the plot about the spiritualists.

Kenneth Silverman, author of the biography Houdini!!! The Career of Ehrich Weiss, who has not been involved with the show, said the focus on Houdini and Margery was “an intriguing idea” for a musical but also potentially fraught.

“Houdini’s experience with her and the spiritualists was a very hostile one, but focusing on it risks taking away from the hugely entertaining moments of illusion and escape that defined his life,” said Mr. Silverman, a Pulitzer Prize winner in 1985 for his biography of Cotton Mather.

For those who worked on “Houdini,” the show remains a delicate, even painful subject. Most declined to comment on the record or would answer questions only by email through publicists. Many said they didn’t want to draw attention to the musical’s travails because its producers are trying to attract a new creative team and star to resuscitate the show. “We strongly believe ‘Houdini’ can be a remarkable theatrical experience,” said David Rockwell, one of the producers. “It’s not easy to create new work, yet the greatest rewards come from big thinking and creative risk.”

Click to read the full article at The New York Times.

Thanks to Dave Sikula.
Written by John Cox at 7:49 AM