While in Budapest researching the third book in her "Houdini Magicien et détective" series, author Vivianne Perret made a surprise discovery. Along with House of Houdini researcher Barbara Kiss, Vivianne found that Hardeen appeared in Budapest with the Circus Carré in August of 1902.

While we know Hardeen played several cities that Harry never did -- Stockholm being a good example -- this is the first mention of him appearing in his birthplace. Houdini visited to Budapest in 1901 (and possibly 1902, another House of Houdini discovery), but as far as we know, he never performed anywhere in Hungary. Interestingly, Houdini was also performing with the Circus Carré in August of 1902, but in Munich.

Below are two ads showing Hardeen with the circus. 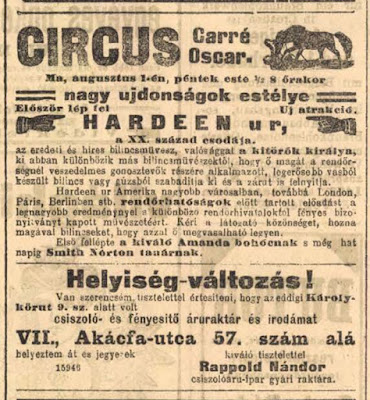 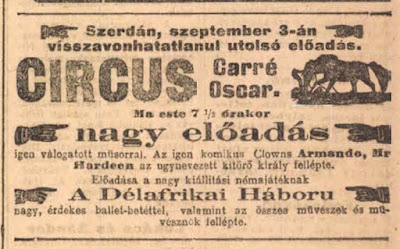 Vivianne's next book is titled La Reine of Budapest ("The Queen of Budapest") and will be released in October 2017. Her current book, Le Kaiser Et Le Roi Des Menottes ("The Kaiser and the King of Handcuffs") is available now.

Thanks to Vivianne Perret and Barbara Kiss.