Who faked Houdini's signature on this photo? 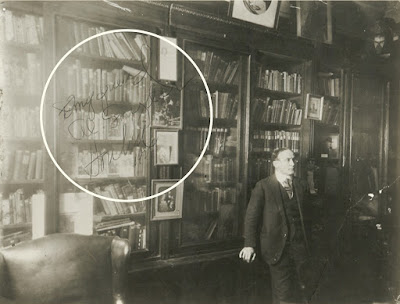 Let's kick off February with a mystery...solved?

The above photo is well-known as the only photo of Houdini inside his library at 278. It's also well-known for featuring a fake Houdini autograph. How do we know it's fake? Well, for starters, it's dated 1927 (a year after Houdini's death)! It's also clearly not Houdini's handwriting, and it's written in ballpoint pen, which did not come into use until the late 1930s. But this photo is one-of-a-kind, so it is frequently reproduced in books, fake signature and all.

I've often wondered who defaced this important image and why. Now Bob Loomis in his book Houdini's Final Incredible Secret [review here] may have provided the answer; or at least a few bits of evidence that could help us capture the culprit. So let's investigate.

According to Bob, this photo first surfaced at the Magic Collectors Weekend in Chicago in 1972. Reproductions of the original were given out as a souvenir by Magic Inc., run by Jay and Frances Marshall. It was reported that "this Jay Marshall property caused much comment." So the original photo appears to have belonged to Jay Marshall.

Two months later, Magic Inc. offered 8x10 copies for sale in The New Tops [May 1972]. The description read: "Houdini in his library, autographed in his own hand."

M-U-M reproduced the image in their November 1973 issue. This is likely the first appearance of this photo in print. But as you can see below, the magazine wisely decided to crop out the bogus signature and make no mention of it in their description. 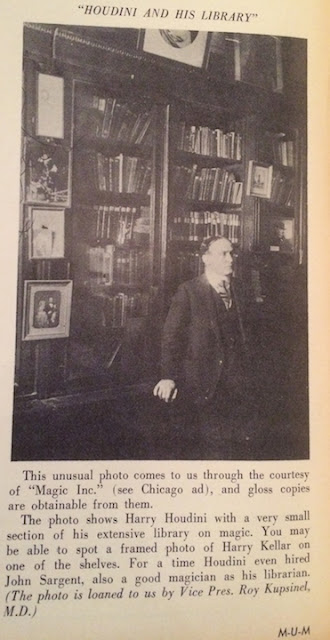 In the fake inscription, "Houdini" addresses the photo to his "friend" Al Snyder, a magician who, according to Bob, had written some unkind things about a series of articles Houdini wrote in the 1920s. The photo surfaced two years after Snyder's death in 1970. So it's likely Jay Marshall acquired the original from Snyder's estate.

This could mean Al Snyder was the forger and the photo Jay acquired already had the signature in place. But, as police would say, Marshall remains a "person of interest." Why? Because on page 134, Bob Loomis provides another incriminating detail:

Jay Marshall had once produced an obvious fake Houdini souvenir. Jay had manufactured and distributed a Houdini advertising ballpoint pen.

While Bob doesn't say he knows for certain Jay was the forger -- he concludes this section with, "I'll leave it to you to discover the truth" -- I think Marshall has to be considered a suspect. He owned the original. He profited from the photo. He was known to create and sell Houdini fakes. And using a ballpoint pen was almost a sly confession. Incidentally, Marshall claimed to have seen Houdini as a boy. He says he fell asleep during the show.

Jay Marshall passed away in 2005. I didn't know him, but from all I've read, he was a beloved figure in magic. So I don't want to condemn Jay without suggesting another possible scenario.

First, consider that if Jay was the forger, why would he write, "To my friend Al Snyder"? Why involve Snyder at all? Wouldn't it have been more appealing to buyers to just write, "Best wishes, Houdini" or something iconic such as, "My brain is the key that sets me free"? Also, wouldn't he have taken more care with the handwriting and date if he really intended to pass this off as legit?

This suggests to me that the forger was probably the person who gave the photo to Al Snyder in the first place. It's possible it was a joke and the "1927" date was part of that joke. Houdini was giving his "friend" Al a photo from beyond the grave. Maybe writing on a Houdini photo didn't seem like such a big deal at this time. Who knew this would prove to be the only copy? So in this scenario, Jay's only offense was that he misrepresented the autograph as genuine in his advertising (hard to believe he wouldn't have known).

So I guess we've come full circle. While we now know the photo's provenance, the forger remains a mystery. Was it Jay Marshall? Al Snyder? An unknown prankster? Or Houdini from beyond the grave?

I'd love to hear from anyone who might have more information.