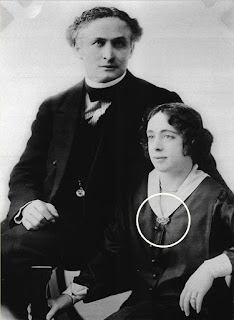 An emerald and ruby encrusted "Royal Crown Brooch" that once belonged to Bess Houdini will be auctioned by Potter & Potter as part of their Spring Magic Auction on April 8, 2017.

According to legend, Bess received the brooch from the Czar of Russia during Houdini's tour of the country in 1903 (but more on that below). There are several photos of Bess wearing the brooch, including this color photo and the famous portrait of the Houdinis on the right.

In the 1940s, Bess gave the brooch to Geraldine Larsen, wife of William Larsen, Sr., who was Bess's attorney. Bess helped "Gerri" form The Magigals, an organization devoted to female magicians, assistants, and wives of magicians. The Larsens sons, Bill Jr. and Milt, went on to found the Magic Castle. Milt's wife Arlene inherited the brooch and has wore it to Castle functions (where I've had the great pleasure of seeing it).

The brooch is now being sold to help fund the "Magic Castle Cabaret" in Santa Barbara, a new venture by Milt Larsen. The brooch has remained private, so this is the first opportunity for magic buffs to finally see this important Houdini artifact, not to mention own it! 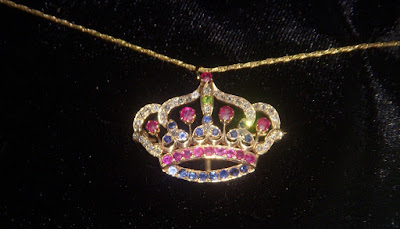 News of the sale was released today in a press release put out by the Larsens via sites like Broadway World. Unfortunately, the press release contains a fair amount of mythology. Along with the claim that Bess received the brooch from the Czar himself (which we'll accept if Bess said it -- but know she was as prone to mythmaking as her husband), the release claims that Houdini was doing espionage as a member of the royal court before being undermined by the head of the Russian secret police. Oye.

While there are several fanciful stories about Houdini performing before Czar Nicholas II (ringing the bells of the Kremlin, etc.), there is no hard evidence that he ever did so. In Houdini!!! The Career of Ehrich Weiss, author Ken Silverman says Houdini planned to travel to St. Petersburg during his 1903 tour, but the engagement fell through when the manager who arranged it vanished.

Harry and Bess did give a private performance for the Grand Duke Sergei Alexsandrovich and the Grand Duchess in Moscow. It's said the duke gave them their dog "Charlie" as a gift. That, as far as I know, was the Houdinis only brush with Russian royalty.

The idea that Houdini was doing espionage during his time in Russia is pure speculation put forward in the sensationalistic 2006 biography The Secret Life of Houdini. While Hollywood has embraced this "Houdini as spy" narrative, most magic historians, including myself, remain highly skeptical.

As auction time nears, I'm sure Potter & Potter will clarify the facts behind Bess Houdini's Royal Crown Brooch in their own auction listing. But this is definitely going to be one to watch! 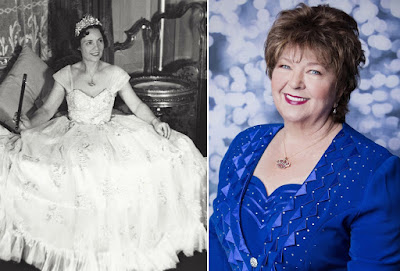 Thanks to Dick Brookz at the Houdini Museum for the alert.

UPDATE 2: I've found a 1952 newspaper clipping about Gerrie Larsen which states Houdini received the brooch from the Grand Duke, not Czar Nicholas II.