This poster for John Clempert, a Russian wrestler turned escape artist, sold on eBay yesterday for a whopping $7,613. This may be a record price for a Houdini imitator. 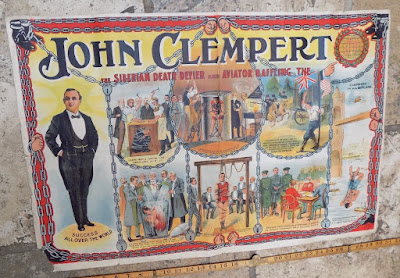 This has to be one of the most blatant Houdini imitator posters of all time. Not only does Clempert co-opt Houdini escape imagery, but he also snatches incidents from Houdini's life. Apparently, Clempert also escaped from a Siberian Transport Prison Van and flew his own biplane!

Also check out the below image of "Clempert", drawn without much modification from a famous Houdini publicity photo. No wonder Houdini hated these guys. According to Magicpedia, Houdini filed a suit against Clempert in England where variety acts were protected. Clempert apologized and promised not to infringe Houdini's rights in future. After Houdini's death, Clempert came out of retirement, but it was a short-lived revival.

Below are links to tales of more Houdini imitators.