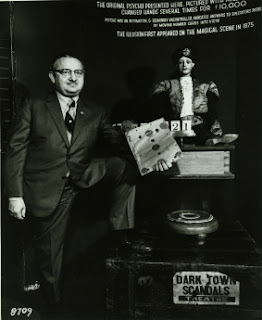 Tom Interval at Houdini Museum reports that Henry Muller, who co-founded the Houdini Magical Hall of Fame in Niagara Falls, Canada, died on February 28 in Hamilton, Ontario. He was 86 years old. The Funeral was held on March 2 at the Adas Israel Synagogue in Hamilton.

Henry was a regular at the Official Houdini Seances and appeared in several Houdini documentaries. He was good friends with the late Sidney Radner whose Houdini collection, including the original Water Torture Cell, was housed at the museum.

Henry ran the Houdini Magical Hall of Fame from 1968 to 1995 when the museum was destroyed in a fire. Despite initial reports of a total loss, many of the items survived and were sold to private collectors. According to the family, Henry held onto "a number of items of Houdiniana" that were recently discovered in a closet.

You can read Henry's obituary at Tom Interval's Houdini Museum.