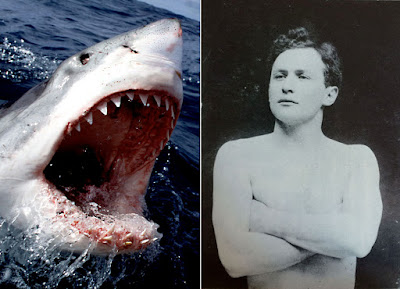 In the summer of 1916, Houdini announced a publicity stunt like no other; he would fight a man eating shark!


The story starts on July 14, 1916, when the Brooklyn Daily Eagle reported that the remains of a young boy, Lester Stillwell, had washed up in Matawan, N.J. Witnesses reported seeing a shark in the vicinity. One fisherman even took at shot at it. In a scene right out of Jaws, the news caused fear among beachgoers and a frenzy of shark hunting and false reports of the shark's capture.

In the midst of all this, the following item appeared in Variety:

United Booking Offices was the all-powerful booking agency wing of the Keith-Albee-Orpheum vaudeville circuit, on which Houdini was a headliner. Houdini was appearing at the Brighton Theater in Brighton Beach during the week of July 24. He then moved to Keith's in Atlantic City for the week of July 31. Houdini was 42 in 1916, not an ideal age for shark fighting. Nevertheless, on August 4th, Billboard reported that Houdini had found his man-eater: 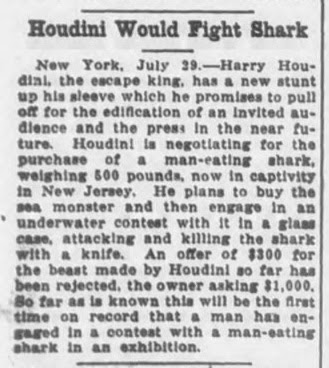 Houdini's shark stunt never happened. Maybe he could not come terms with the shark salesman. It's also possible the entire thing was cooked up for publicity. But shark fighting was still on Houdini's mind in November when he explained his shark killing technique, learned from South Sea Islanders, to the Cincinnati Star:

"The secret is this: When you dive for the shark, you hold in your left hand a stick of wood with a [sharped] point at each end and a piece of cloth tied to each to attract the shark. The big fish turns on his back to attack you and you point the stick at him. He opens his jaws to bite off your arm and you thrust the two pointed stick into his mouth. He closes his jaws and they are caught tight on the points. Then you use your right hand to rip open his body. Quite easy when you know how."


Interestingly, news of this same type of stunt appears to have again surfaced during Houdini's silent movie days. In my own collection I have a letter Houdini wrote to a Col. Flinn dated August 8, 1919, in which he states:

The shark stunt is on the square, so don't let that worry you, even if all the papers copied the advert.


Digging a little deeper, it's possible Houdini's shark fighting idea was originally sparked by the Williamson Bros Submarine Film Co., who had planned to make a film with Houdini. One of their films featured a "Death battle between a man and a man-eating shark." Coincidentally, an ad for that film appeared right beside Houdini own advertisement in the April 4, 1915 Cincinnati Enquirer Sun (below). 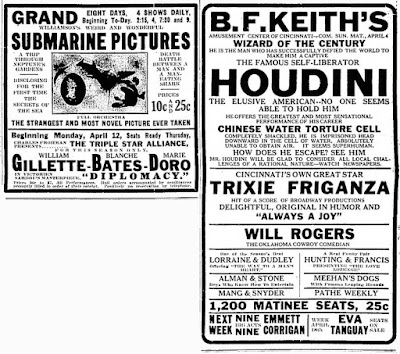 Real or not, I'm happy this stunt never materialized. It seems fool-hearted and cruel and I don't think it would be a feat we'd celebrate Houdini for today. Give me vanishing elephants instead.

Below are links to a few more aborted Houdini stunts.