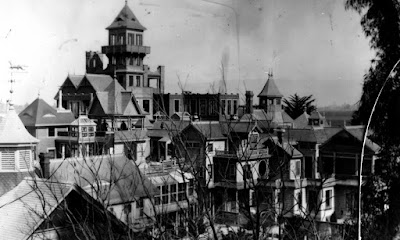 Recently collector and magic dealer Jim Rawlins showed me a fascinating letter from Arthur Hinson, Vice President of the Pacific Coast Association of Magicians, to Edward Saint. The letter is dated May 24, 1938, and in it Hinson mentions that Saint and P.C.A.M. president Caryl Fleming recently discussed the possibility of holding a Houdini seance at the famous Winchester Mystery House in San Jose, CA. He writes:

I think the idea as far as publicity for the P.C.A.M., Mrs. Houdini and the Winchester House, would be very fine and all probabilities handled right, might hit the press syndicate. Will you please advise me as to your idea on this matter? Also the time and date of such proposed seance.


This is interesting for a few reasons. First, it's yet another connection between Houdini and this famous landmark of spiritualistic folly (which Houdini himself visited in the 1920s). But it also shows that Ed and Bess might not have been all that committed to the idea that the Final Houdini Seance, held in Hollywood in 1936, was all that final. We know Saint was tempted on more than one occasion to revive the Houdini seances, legit and otherwise.

But considering this seance never happened, it's possible Bess and Ed decided it wasn't right to do another seance after the expiration of the 10 year compact.

The Winchester Mystery House eventually did host a Houdini seance when the Society of American Magicians Assembly No. 94 held what they called a "50th anniversary" seance in 1977. As far as I know, Harry stayed away.

Thanks to Jim Rawlins. Be sure and check out Jim's recently redesigned Magic Collectibles website.