'Our Magic' and the music of Houdini (update)

Recently I watched the 2014 documentary Our Magic. It's a pretty good doc that I'd recommend, and the credits offer up a Houdini surprise. As you can see below, the documentary used several "original songs from the musical The Great Houdini: Don't Break The Spell." 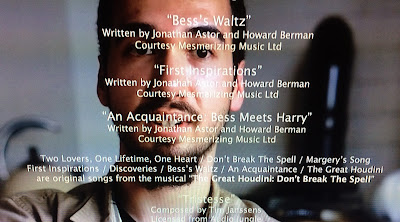 I've never heard of this musical and a Google search turns up nothing. Does anyone out there have any info on The Great Houdini: Don't Break The Spell?

Our Magic can be streamed at Amazon Video.

The original music used in the documentary was written by Jonathan Astor and myself.

Jonathan adapted/re-scored instrumental parts of songs, composed for a musical, for which we also wrote the lyrics.

The musical is still being developed. As you know, there have been so many aborted or failed Houdini musical projects over the years...we're trying everything in our power to get this right!