A terrific original photo of Houdini inside his Water Torture Cell sold for $889.20 (including 17% buyer's premium) at Haversat & Ewing's "Houdini's Birthday Auction" today. The photo shows the cell on stage flanked by assistants Franz Kukol, Jim Collins and James Vickery. (The fourth assistant is unknown to me.) 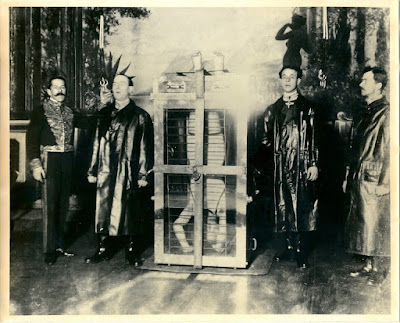 What makes this shot extra special is we see Houdini inside the inner cage, or what he called "the steel grill." This appears to have been later removed from the escape. I believe this photo has only ever appeared in Milbourne Christopher's' Houdini A Pictorial Life, and that image does not have the clarity seen here.

This latest Haversat & Ewing auction contained several other nice Houdini lots. A two-page letter on rare stationary with excellent content ("Do you know in my hardship days I NEVER borrowed a single dollar!!!!!!!!!") went for $6,142. A pair of vanishing umbrellas owned by Houdini took $1,099. Even I was able to land a 1925 "Beware" pitchbook (I've been after one of these).