Peepolykus blend Houdini and Dracula on the BBC

The UK comedy troupe Peepolykus have created a radio play that mixes Houdini and the story of Dracula. This is part of their ongoing "A Trespasser's Guide to the Classics" and can be heard at BBC Radio 4 for the next 28 days. 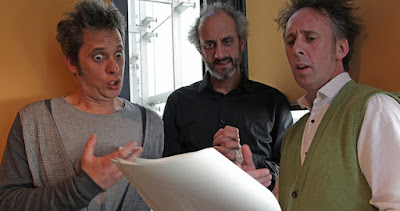 In 19th-century Whitby, a magician prepares to compete with Harry Houdini at a major international Magic Convention. When a ship carrying a cargo of fifty coffins runs aground on the town's beach, he suspects Houdini of pulling a huge publicity stunt.

In this second series, the comedy troupe Peepolykus assume the roles of minor characters in great works of fiction and derail the plot of the book through their hapless buffoonery.


A Trespasser's Guide to the Classics, Series 2, The Neck is written by John Nicholson and Richard Katz and directed by Sasha Yevtushenko.