Reader Gary Frank sends in this photo he recently took at the famous Winchester Mystery House in San Jose, California. As you can see, they have hanging on the wall what appears to be an original Houdini lithograph, sometimes called the "Houdini for President" poster.

According to Gary, this poster was originally on display in their wax museum back in the 1950's - 1960's. It was recently discovered in storage and now hangs in the gift shop area that leads to the cafeteria. Last year one of these posters sold in auction for $12,000. 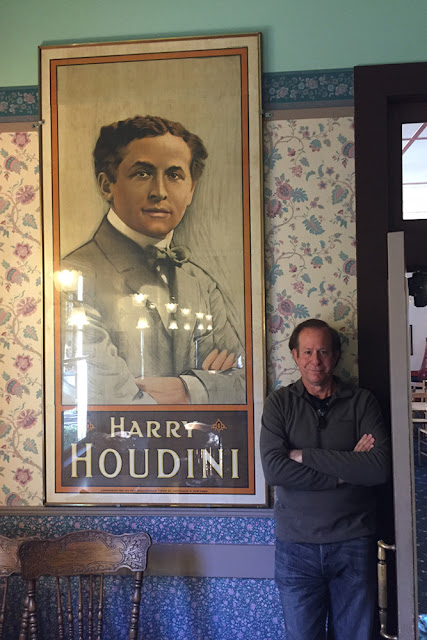 The Winchester Mystery House is one of the best examples of Spiritualism run amok. The owner, Sarah Winchester, heiress of the Winchester rifle fortune, was told by her spirit guides that if she kept adding to her house she wouldn't die. The result is a sprawling 160 room maze-like mansion with stairways that lead into ceilings and doorways that go nowhere.

Houdini visited the house after Sarah's 1922 death (looks like the spirits gave her bad advice). An original 1924 newspaper article in which Houdini mentions his visit is on display in the museum.

I've always thought the Winchester Mystery House would be an ideal spot for an Official Houdini Seance. And with Harry now there to watch over the proceedings, even more so!

Thank you Gary. Check out his work at Propelled Pasteboards.

UPDATE: Gary Frank has done a bit more digging with the help of a staff member at the house and has uncovered the following:

The Houdini three sheet poster was originally purchased in 1973 at an auction in San Francisco by one of the owners of the Winchester House. It was purchased to be a part of a Houdini display (complete with a wax figure of Houdini and the newspaper article) that never came to fruition. The poster on its own was on display for a short time and then it was placed in storage until recently.