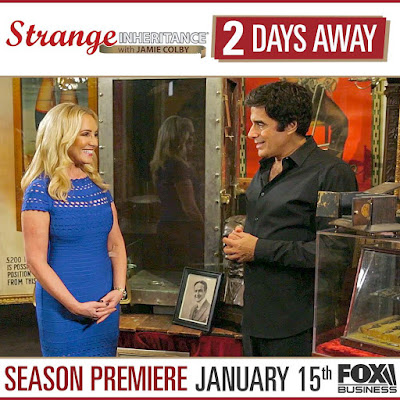 What: FOX Business Network (FBN) will present new back-to-back episodes of the hit primetime reality program Strange Inheritance on Monday, January 22nd at 9PM/ET. These episodes are part of a series hosted by FBN’s Jamie Colby that chronicles the stories of inheritances from people and places all across the country. The first half-hour episode entitled, “Indian Arrowheads,” explores the tale of a North Carolina man who inherits 250,000 ancient Indian arrowheads.

In the next half-hour episode entitled “Houdini Jewel” airing at 9:30PM/ET, a magician’s wife inherits a jewel-encrusted pin said to have been bestowed on Harry Houdini by Czar Nicholas II.


Below are links to a few posts about the brooch (including a recent update). I fear I might be the villain of this episode who casts doubt on the jewel having come from Czar Nicholas II. Will Jamie get the bottom of the mystery? Find out Monday!