A new twist in the tale of the "Czar's brooch" 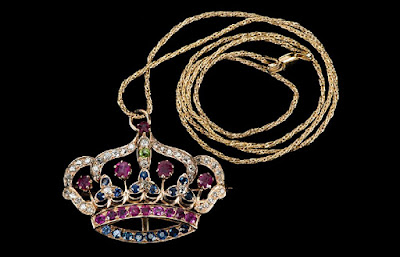 Last year a brooch that belonged to Bess Houdini sold for $72,000 in a Potter & Potter auction. Bess gave the brooch to Geraldine Larsen in the 1940s, and it had remained in Larsen family until the sale last year. The buyer was David Copperfield.

According to the Larsens, Bess said she had received the brooch from the Czar of Russia. Trouble is, there's no record of Houdini ever performing before the Czar. I suggested she more likely received it from Grand Duke Sergei Alexsandrovich during the Houdinis one and only tour of Russia in 1903. But now I've found something that makes me question even that!

Below is an article from the May 23, 1899 Joplin Daily News about a dressing room robbery while the Houdinis were performing at the Pavillion Theater in Joplin, Missouri. Check out what was stolen: 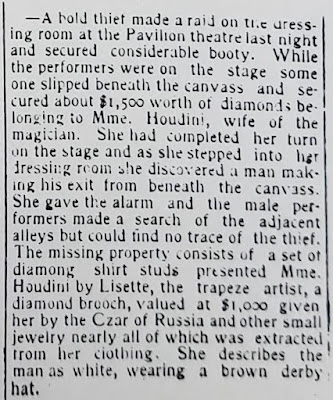 So here we have Bess claiming to own a brooch given to her by the Czar four years before the Houdinis even traveled to Russia. In 1899, the Houdinis were still relative unknowns who had only ever travelled as far as Canada. The idea that the young couple had ever performed for royalty was shear vaudevillian hokum.

So now we have evidence that Bess (or Harry) peddled a fiction about owning jewelry gifted from the Czar of Russia. That means if Bess really did later get a brooch in Russia (from the Grand Duke or otherwise), we'd have to accept it as a coincidence that this fiction came true. That's not impossible. But I'm not a fan of coincidence, especially when a more likely scenario is present.

Suddenly it seems a lot more likely that Bess simply made up the story about the later brooch being given to her by the Czar of Russia, just as she had about this earlier brooch that was stolen. Like her husband, she wasn't adverse to pinning false medals to her chest. Either that or Bess and Czar had something pretty serious going on!

But as I said then, the origin of the brooch really isn't all that important, and I don't think it changes the value whatsoever. There's no doubt that Bess owned the brooch, and that's what makes it precious today.

Last year I filmed an interview for the popular FOX Business Network show Strange Inheritance in which I talked about the brooch and its mysterious origin. Too bad I didn't have this detail to share then! The new season starts January 15. The brooch episode will air on Monday, January 22nd at 9:30pm EST.