One of the things I love about working on my New Houdini Chronology is the discovery of cool bits of untold Houdini history tucked away in old newspapers. These are things that haven't been found, or maybe considered too insignificant to make the pages of major biographies. But I find stuff like this humanizing and therefore very significant.

Here's something I recently found while working on 1907. While playing the Grand Theater in Pittsburgh, the Houdinis beloved dog Charlie went missing. Charlie vanished on the street adjoining the theater on Monday, May 20. The next day The Pittsburgh Daily Post reported the crisis. 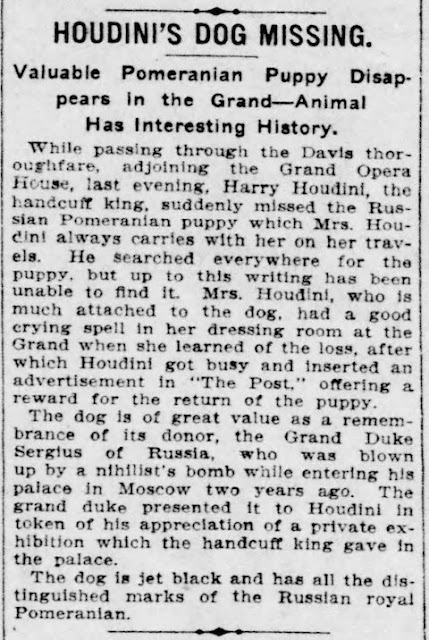 This article is interesting as it gives Charlie's origin story, which might be the first time it ever appeared in print. Of course, the paper got Charlie's color wrong. Charlie was white, not black, and this mistake would certainly not help in finding him!

The next day, May 22 (the day Houdini jumped from the 7th Street bridge), Houdini's own ad appeared. 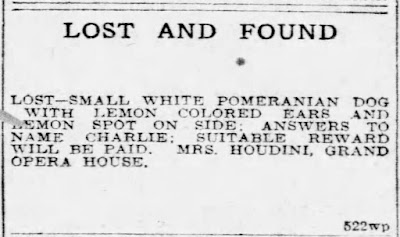 Alarmingly, Charlie was still missing for a third day, May 23. This time Houdini put a dollar amount on the reward. His $25 calculates to $627.80 today.

The papers don't record what ultimately happened, but it appears Charlie was found. The dog shows up in a 1908 article (again in Pittsburgh) and his death in 1909 is recorded in Houdini's diary. But it must have been a scary few days for parents and pup! 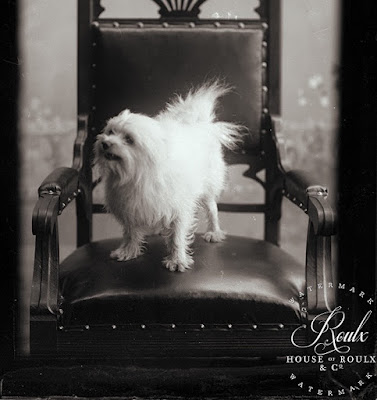 The above photo of Charlie can be purchased from House of Roulx & Co.