The Doug Henning Project has posted video of Doug and Debby Henning guest hosting a Detroit morning show called Kelly & Company in the 1980s. It's a remarkable 58 minutes, but what will be of special interest to Houdini buffs is Doug's interview with Bob Lund of the American Museum of Magic. They discuss Houdini at length, and Bob shows a coin tray that belonged to Houdini (I love it when Debby just wants to touch it). Doug also shows a collection of letters Houdini wrote to an executive of the Ford Motor Co. Unfortunately, they don't explain what those letters were about. 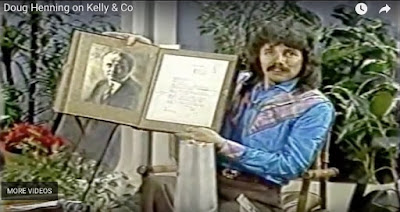 There's a lot here to love, so click on over to The Doug Henning Project and have a watch. The Bob Lund interview starts at 43:35.

UPDATE: Thanks to Chuck Romano, I now know what those letters were about. Houdini was corresponding with Fred Black, the assistant to the president of American Motor Co, who has done some research into the Booth family on behalf of Henry Ford. Houdini was fascinated with the Booths and John Wilkes Booth in particular. Lund penned a three part series about the correspondence called "Afterword on Houdini" for Abracadabra starting in the July 21, 1956 issue.