A new exhibition devoted to Vaudeville! opens today at the Harry Ransom Center at the University of Texas at Austin. Of course, the Ransom Center is home to one of the largest Houdini archives in the world, so you can bet Houdini is part of this show. Below are details. 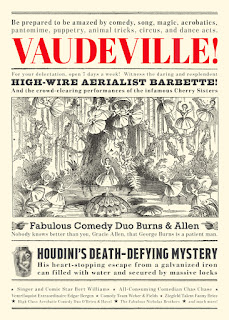 For more than a century, vaudeville was the most popular form of American entertainment and one of the country's largest cultural exports. Performances on the vaudeville stage included comic sketches, magic, acrobatics, animal tricks, blackface performance, celebrity appearances, early film, and more. Shows featuring immigrant acts, racial stereotypes, and frequent appeals to nationalism defined a complex and often problematic sense of American identity at the turn of the 19th century.

Explore vaudeville's influences from Roman mimes to the saloons of the American frontier. Learn what life on the road was like for the thousands of entertainers who traveled around the country performing in theatres that were part of a vast network of venues, and witness the mid-century revival of vaudeville's relevance in musical theatre, radio, film, television, and the internet. See artifacts related to some of Vaudeville's best-known performers—Harry Houdini, Mae West, W. C. Fields, Bert Williams, George M. Cohan, Burns & Allen, Tony Pastor, the Nicholas Brothers, Barbette, and more.

The exhibition features the Ransom Center's extensive holdings of Harry Houdini, Tony Pastor, and Florenz Ziegfeld, among others, to show the development of vaudeville's highly organized form and its long-lasting impact on contemporary film, television, and comedy.