How would you like to open your August 8, 1925 issue of Variety and see this? 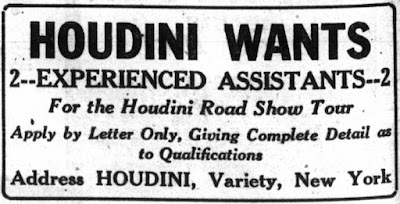 This was when Houdini was preparing the first season of his "3 Shows in One." It appears he's looking to augment his core team of Jim Collins, James Vickery, and Frank Williamson (aka Franz Kukol?). I have heard the show included an assistant named Jack Arden. Was he one of the winning applicants, I wonder?

Dorothy Young says she answered a similar ad for dancers.

Email ThisBlogThis!Share to TwitterShare to FacebookShare to Pinterest
Tags: [History], 1925, 3 Shows in One, Advertising, Assistants