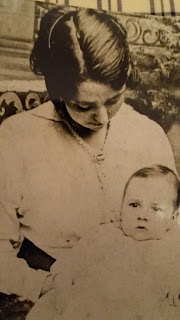 Recently I received an email from Ruth Owen in the UK who tells me family lore claims her grandmother, Ellen Cook, assisted Houdini while he was performing in Yorkshire in 1914.

Had Ruth mentioned any other year, I would have been skeptical. As we know, Houdini primarily used male assistants or Bess during the bulk of his career. But 1914 was the year Houdini experimented with his "Grand Magical Revue" in the UK, and in that show he would have used female assistants for illusions such as "Goodbye Winter" and "The Arrival of Summer." So was Ellen Cook one of them? Here's what Ruth's mother recorded:

"Eventually Mum obtained a post at Barnsley Empire Theatre. She used to tell us that one of the highlights was when she assisted Houdini in his spectacular escapology feats. Photographs of her then show fine features and long, thick, black hair styled in a bun.

Lucky for me that she was in that place, at the time, or I would not be writing this! For it was at the Empire that my father, Christopher Musgrave, first saw her assisting Houdini."


To investigate this further, I turned to Derek Tait, the true expert on Houdini in the UK (watch for Derek's The Great Houdini: The British Tours coming this year). Derek tells me Houdini did appear twice in Yorkshire in 1914. Between February 16 and 21 he played the Empire Theater in Leeds. Later he played the Palace Theatre in Hull from April 27 to May 2, where he did indeed present the Grand Magical Revue. However, there is no record of Houdini in Barnsley.

So we have the right time, the right region, the right type of act, but not the right theater. But that doesn't preclude the possibly that Ellen Cook is a forgotten Houdini assistant. We'll just need to keep digging

This has also set me to thinking about Houdini's Grand Magical Revue. The idea that Houdini would have had to have used new female assistants never occurred to me before. (Unless Bess worked each illusion with him?) Houdini may have hired his "box jumpers" regionally, so there may be a few Ellen Cook's out there.

Thanks to Ruth Owen and Derek Tait.